The more than century-old photo shows a stoic, proud young man wearing an ammunition belt and holding a shotgun in his right hand. At his feet lays a loyal hunting dog, seemingly tired from a day in the field. The young man is identified in the corner of the photo as Frank Hanneman, age 14. That dates the photo to 1909 or 1910.

The paper-mounted and framed portait, in nearly perfect condition, survived all of these years in the possession of Carl F. Hanneman, Frank’s brother, and later in the collection of David D. Hanneman, Carl’s son. It is one of the oldest existing photos of a Hanneman from Wood County, Wisconsin.

What do we know about this young hunter? Frank Herman Albert Hanneman was born July 7, 1895 near Grand Rapids, Wisconsin, the son of Charles and Rosine Hanneman. In his early years the family lived and worked on the farm of his uncle, William Hanneman, in the Town of Grand Rapids in Wood County. The 1900 U.S. Census lists Charles Hanneman, 33, as a farm laborer on the farm of William Hanneman. By 1905 the Charles Hanneman family moved to Baker Street in Wisconsin Rapids when Charles got work at the Consolidated Water Power & Paper Co.

The Hanneman boys enjoyed the great outdoors of central Wisconsin. We might assume by the photo, Frank enjoyed hunting birds. We have plenty of photos of a young Carl Hanneman fishing. On June 11, 1916, Frank married Irma Wilhelmine Louise Staffeld, and the couple took up residence on Baker Street in Wisconsin Rapids – a block away from his parents. The couple had five children between 1916 and 1929: Dorothy, Marjorie, Robert, Elizabeth and Joyce. Like his father, Frank had a long career working at Consolidated Water Power & Paper Co.

On July 14, 1947, Frank suffered a heart attack at home, and died shortly after arriving at Riverview Hospital. He was 52. His brother, Carl, was vacationing with his family in North Dakota, but returned for the funeral before rejoining the family vacation. 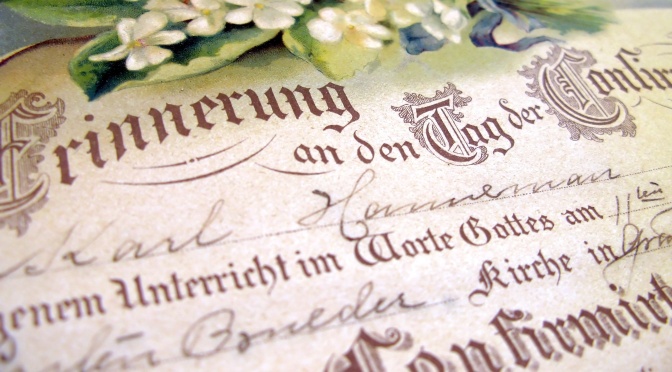 “Memory of the Day of Confirmation.” Those German words are written in ornate lettering across a beautiful certificate commemorating the confirmation of Karl (we know him as Carl) Hanneman on June 11, 1916. The roughly 11×17 inch document, found among the papers and photographs of David D. Hanneman, is remarkably well preserved and speaks to a time before Carl’s conversion to Catholicism. The certificate is written entirely in German and reads:

“Karl Hanneman received instruction in the Word of God on 11 June 1916 in the First Moravian Church, Grand Rapids, Wis.” At the bottom of the certificate it reads: Gottes Furcht is aller Weisheit Anfang, which roughly means “All Wisdom Begins with Fear of God.” The document was signed by the Rev C.A. Meilicke.

We know Carl’s father, Charles Hanneman, was raised as a Lutheran, as were most of the Hannemans. The marriage certificate for Charles and Rosine Hanneman (nee: Ostermann) only says their wedding was a “Divine Service” and does not indicate a church. In 1907, Charles and Rosine and their four sons joined the First Moravian Church of Wisconsin Rapids, a congregation of some 450 people in a brick church on First Avenue South.

The Moravian Church is one of the oldest Protestant denominations and traces its roots to the 1450s in Bohemia and Moravia. The area is now part of the modern day Czech Republic. It is possible the family’s connection to the Moravian Church came from Rosine (Ostermann) Hanneman, whose father emigrated from Saxony in what is now eastern Germany.

Carl and Ruby Hanneman were both converts to Catholicism, but we’ll save those stories for another entry.

It is common knowledge to family members that Carl F. Hanneman was born on Oct. 28, 1901. But when he needed proof of that fact back in 1946, there was none to be found. On Feb. 22, 1946, Carl sent a letter and the 50-cent fee to the Wood County register of deeds, asking for a copy of his birth certificate.

Register of Deeds Henry Ebbe sent the letter back with an answer that must have shocked Carl: “There doesn’t seem to be any birth certificate for you on the above date. There is a Ruben born Oct. 21, 1901. Father Chas. and Mother Rose. Could this be yours? I am returning your 50 cents.”

That set Carl off scrambling to find proof of his birth. He asked the pastor of the Moravian Church of Wisconsin Rapids for help. Carl’s parents, Charles and Rosine Hanneman, joined the Moravian Church on March 29, 1907. Church records did list Carl F’s birthdate as Oct. 28, 1901, so Moravian Minister George Westphal wrote a letter testifying to the church records. But since Carl was not baptized in the Moravian church, this record was only indirect evidence of his birth.

If Carl had turned to U.S. Census records (which were not available at the time), it might have confused the matter more. The 1910 Census lists the youngest son of Charles and Rosa Hanneman as Harold Hanneman, age 8. Carl’s first middle name is Henry, so no doubt the Census worker simply wrote it down wrong.

So what happened? It’s not clear, but we do know the record was officially corrected. Carl’s  birth certificate still shows the name Ruben and the wrong birthday, but the errors  are crossed out and replaced with the correct information. Wood County Health Officer Frank Pomainville corrected the record in red ink in 1960.