I have nothing but good memories of Halloween. Growing up in the late 1960s and early 1970s, October 31 was a date we looked forward to. Whether we got to buy a costume at the dime store or made our own, it was always an exciting night.

One of my most vivid Halloween memories was documented in my book, The Journey Home. I recall Dad tearing out the front door in his sock feet. I wondered what was happening. We figured it out a few minutes later when he dragged two teenagers into the front door and made them apologize for smashing our lit pumpkins. He then turned them over to Sun Prairie police.

We had one sad Halloween when my brother David fell into the neighbors tree well and spilled all of his candy. We all shared to make up for it. Another year, we went across town to “trick or treat” at a few houses of family friends. At one door, I was shocked that the lady who answered called me by name. “How does she know me with this costume on?” I wondered. My brother chimed in, “You forgot to put your mask down.” D’oh!

Perhaps the most fun we had was creating our own costumes. Lighting the end of a cork on fire, then using the charred remains to paint black whiskers on our faces. Stuffing pillows up an oversized shirt helped complete the hobo look.

It wasn’t until toward the end of my trick-or-treating days that the scare over supposed razor blades in candy apples occurred. Hospitals offered to X-ray candy bags to check for pins or razor blades. That made me wonder if the candy would then glow? Ah, as it turned out the whole thing was a fraud that took on the sheen of urban legend.

Once I had my own children, Halloween took on a new dimension. Our firstborn was too shy to go door to door, so we made our main stop at Grandma and Grandpa’s house. Eventually, Halloween became a major event. French onion soup or chili simmered in a crock pot while we took the kids around the neighborhood collecting goodies. Then we retreated into the warmth of the house for good food, warm apple cider and pie. The kids also ate candy.

With the more recent controversies claiming Halloween as un-Christian or even satanic, it was refreshing to read this article on About.com regarding the Catholic roots of Halloween.

Son Stevie with Mom and the largest pumpkin we ever had, circa 1992.

Stevie Hanneman poses before the pumpkin pile at Swan’s Pumpkin Farm, circa 1995.

Stevie Hanneman and a friend trick or treat in a Sun Prairie neighborhood in 1994. 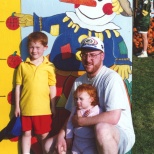 Dad with Stevie and Samantha Hanneman at Swan’s Pumpkin Farm, 1997.

We made Swan’s Pumpkin Farm an annual outing for more than 15 years.

Samantha Hanneman carves her pumpkin, circa 2002. 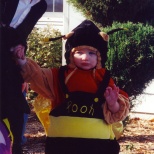 Little Ruby Hanneman as a bumblebee, helped along by brother Stevie in 2000. 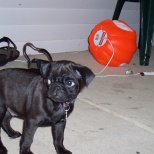 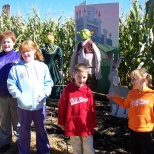 Samantha Hanneman hands out candy on Halloween, circa 2007. 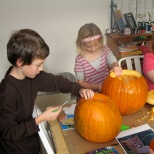 Ruby Hanneman (at right) with a neighborhood friend.

We just had to pose Samantha Hanneman with this sign on Halloween, circa 2010.