I just learned with sadness of the death of my Dad’s older brother, Donn Gene Hanneman, who died in Minneapolis at age 88. Uncle Donn was the last of the Mauston Hanneman family to pass away. My Dad, David D. Hanneman, died in 2007 at age 74.

I have many memories of my uncle. He was foremost the father of nine wonderful human beings, my cousins Diane, Caroline, Tom, Jane, Mary Ellen, John, Jim, Nancy and Thomas Patrick (March 1-4, 1949). The cousins were raised by a saintly mother, my aunt Elaine Hanneman.

Donn was a veteran of World War II and served as a seaman-second class on the USS Hoggatt Bay. The USS Hoggatt Bay (CVE-75) was a Casablanca-class escort carrier (crew of 860) commissioned in December 1943.

As a boy, Donn had his share of illnesses and injuries. He spent more than a week in the Marshfield hospital in September 1929, then returned there in April 1930. Just before my Dad was born in March 1933, Donn was hospitalized in Wisconsin Rapids for more than a week, after an operation for appendicitis.

Just after his 11th birthday in August 1937, Donn was standing on the running board of a moving vehicle while leaving the Juneau County Fairgrounds when he fell and suffered a head injury. He was seen at the Mauston clinic and taken home, but soon after “lost his power of speech and all consciousness,” according to an account in The Daily Tribune in Wisconsin Rapids. “He was then rushed to the hospital.” Donn was diagnosed with a concussion and put on two weeks of bed rest, although that was extended. The September 8 edition of The Daily Tribune said Donn “is making a satisfactory recovery, although he will be confined to his bed for two more weeks.”

Back in those days, a family’s every move ended up in the newspaper. In the case of the Hannemans, it was thanks to the faithful correspondence of Ruby Hanneman. “Mr. and Mrs. Carl Hanneman and little son Don Gene were completely taken by surprise last evening when forty friends arrived to give them a house warming on the occasion of moving into their new home on Hale Street,” the Wisconsin Rapids Daily Tribune reported on April 8, 1932.

Some of the most charming photographs in our library are of a 5-year-old Donn dressed up as a cowboy playing with friends on the sidewalks on the 1200 block of Washington Avenue in Wisconsin Rapids. We detailed those photos in a previous post.

As a youth Donn enjoyed books, and collected enough that his father built him a bookcase that held up to 175 volumes. Carl wrote to my then 6-year-old father about it in August 1939. Dad was staying with an aunt and uncle in Waukegan, Illinois. “Say David, I made a book case for Donn for his birthday, and you know that you still have something coming,” Carl wrote, “so what would you like to have Dad make something for you too, if so tell mother and I will try to start it as soon as I can.”

For a time Donn attended St. Patrick’s Catholic Grade School in Mauston, then run by the Benedictine Sisters. He was among the graduates attending the school’s 100th anniversary in 1995. At the event, he ran into one of his teachers, Sister Emeric Weber, who was just 19 when she started teaching at St. Patrick’s.

Like his brother David and father Carl, Donn was a longtime Fourth-Degree member of the Knights of Columbus, the world’s largest Catholic fraternal and service organization. He most recently belonged to Council 1013 in Rochester, Minnesota.

There are many others better qualified to provide more recent stories about Donn. And even though he tossed my father through the bay window of their Mauston home when they were boys, my Dad didn’t hold it against him. When he was ill with cancer in the fall of 2006, Dad put it simply and succinctly: “He’s my brother and I love him.”

Donn G. Hanneman (center) in his U.S. Navy uniform, with sister Lavonne and brother David in 1944.

Donn G. Hanneman lounges outside his Grandpa Treutel’s home in Vesper, Wisconsin, circa 1930.

Donn at the family home in Fond du Lac. 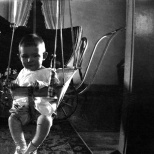 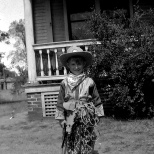 Donn in his cowboy threads at Wisconsin Rapids. 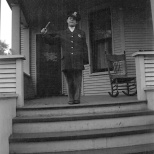 Donn G. Hanneman looks like a lonely cowpoke with his wagon, circa 1930.

David D. Hanneman on the shoulders of brother Donn. 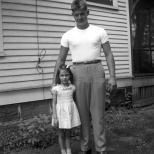 Donn G. Hanneman at the Mauston rail station, circa 1944.