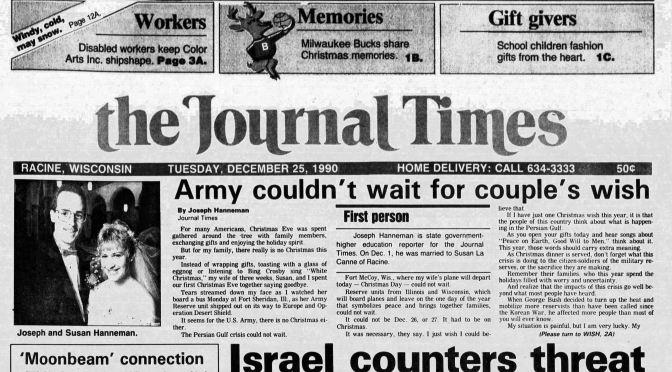 This article sat atop Page 1 of the Racine Journal Times on December 25, 1990. It was one of the few times I wrote about my personal life in the pages of the newspaper. The memories are still vivid nearly 30 years later.

For many Americans, Christmas Eve was spent gathered around the tree with family members, exchanging gifts and enjoying the holiday spirit.

But for my family, there really is no Christmas this year.

Instead of wrapping gifts, toasting with a glass of eggnog or listening to Bing Crosby sing “White Christmas,” my wife of three weeks, Susan, and I spent our first Christmas Eve together saying goodbye.

Tears streamed down my face as I watched her board a bus Monday at Fort Sheridan, Ill., as her Army Reserve unit shipped out on its way to Europe and Op­eration Desert Shield.

It seems for the U.S. Army, there is no Christmas ei­ther.

The Persian Gulf crisis could not wait.

Fort McCoy, Wis., where my wife’s plane will depart today -— Christmas Day — could not wait.

Reserve units from Illinois and Wisconsin, which will board planes and leave on the one day of the year that symbolizes peace and brings together families, could not wait.

It was necessary, they say. I just wish I could believe that.

If I have just one Christmas wish this year, it is that the people of this country think about what is happen­ing in the Persian Gulf.

As you open your gifts today and hear songs about “Peace on Earth, Good Will to Men,” think about it. This year, those words should carry extra meaning.

As Christmas dinner is served, don’t forget what this crisis is doing to the citizen-soldiers of the military re­serves, or the sacrifice they are making. Remember their families, who this year spend the holidays filled with worry and uncertainty.

And realize that the impacts of this crisis go well be­yond what most people have heard.

When George Bush decided to turn up the heat and mobilize more reservists than have been called since the Korean War, he affected more people than most of you will ever know.

My situation is painful, but I am very lucky. My wife will not be in Saudi Arabia, scorched by heat, bored by the de­sert and worried about war. I thank God for that every day.

Our story is far from unusual. Since the reserves were first called up in August, our lives have been under a cloud.

The specter of being sent to Saudi Arabia filled every day with worry. Every day that should have been full of excitement as we planned our wedding was shadowed by fear that the ceremony would not take place.

We heard a million ticks of the clock during those months, but we made it to our wedding day, Dec. 1. We forgot about the Army for a while. We went on our honeymoon.

But we cut it short and came home when her unit was activated.  “That’s all right,” we said, “we will still have Christmas.”

Between scrambling to put wed­ding gifts away and move into our home, our days have been filled with tension and bureaucracy. Power of attorney had to be de­cided, many forms filled out.

She will take a more than 40 per­cent pay cut from her job by being on Army pay. Forty percent cut, but no relief from creditors. Our in­terest rates are reduced a bit by Uncle Sam, but the bills keep com­ing.

So we will sell one of our cars. We don’t have to, but we have this crazy idea about having enough money for phone bills, and for plane tickets when I go to visit.

But again, we are lucky. She will be stationed where there are phones, and where a husband can fly in and see his wife.

We are lucky, because we don’t yet have children who will see their mother taken away on Christmas Day. She’s not one of the single mothers who was forced to find care for her baby because the Army called her to duty.

We don’t have a new house to worry about, or mortgage payments to make, like many reservists.

And we have had time together. It took getting up at 4 a.m. each day to make sure she reported promptly by 5:30 for duty, but we had time. Time to talk, and prepare, and pray for the day this whole thing ends and everyone comes home.

We got so close to Christmas, we felt sure we would be safe for the holiday. Surely, I thought, even the Army believes in Christmas. Now, I know better.

But we are lucky, I keep telling myself. And in the end, I know I will see the wisdom in those words.

But standing on the wind-whipped pavement of a cold military base on Christmas Eve, I don’t feel very lucky. 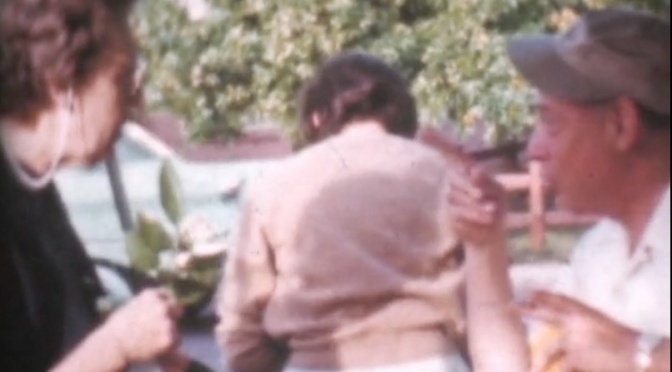 Many years ago when I first attempted to transfer old 8mm films to digital format, I made a series of “Glimpses of the Past” DVDs with footage from the 1950s and 1960s. Over the years, with several moves and changes in computers, the source material for those was lost. But now I located one of those DVDs and ripped it to digital using Handbrake software. The result can be seen below in the Vimeo player.

Stevie Wilson and Laurni Lee Wilson made their own Christmas greeting in December 1942 with this photograph sent to their Uncle and Aunt, Carl and Ruby Hanneman of Mauston, Wisconsin. They even included greetings from their dog, Melissa. The Wilsons lived in Waukegan, Illinois, where the Hanneman family often visited. Stevie and Laurni Lee are the children of Lawrence and Nina (Treutel) Wilson. Nina is Ruby (Treutel) Hanneman’s sister. Merry Christmas!

The Knights of Columbus has long championed the “Keep Christ in Christmas” message to remind the public that the “holiday season” is really about the birth of the Savior. Each year, the more than 14,000 local K of C councils promote the message with car magnets, yard signs, television ads and radio spots.

Back in 2010, I wanted to create a 30-second broadcast commercial with this message, but we had no production budget. I found a beautiful mosaic image from the Knights of Columbus Incarnation Dome at the Basilica of the National Shrine of the Immaculate Conception in Washington, D.C. The year before, I used that image to create a billboard we placed alongside Interstate 94 in Racine County, Wisconsin.

For the TV spot, we planned to use that still image with a pan-and-zoom “Ken Burns effect,” but I still needed voice talent and music. I looked no further than my then 11-year-old daughter, Ruby. She only needed a couple of takes to nail the script voiceover. My other daughter, Samantha, 14, took to her keyboard and recorded a section of “Greensleeves.” That is the tune used for the hymn What Child Is This? Once I put it all together, we had a very nice broadcast commercial, quite beautiful in its simplicity. The finished spot ran hundreds of times on a wide variety of cable television networks throughout the Archdiocese of Milwaukee. You can watch the video in the player below.

In the winter of 1966 or 1967, a young father designed and hand-crafted an outdoor nativity scene to decorate the family home in Sun Prairie, Wisconsin. David D. Hanneman (1933-2007) painted the set freehand and put it on display just under the garage window of his home on Wisconsin Avenue. The nativity scene was a fixture at the home in those early years, but eventually was put in storage and forgotten.

Forty years later, after David Hanneman died, the badly weathered Nativity figures were rescued from a trash can in the garage. Over the next 18 months they were restored to almost original condition and put on display in the Village of Mount Pleasant.

The original backers and braces were removed from the cutout figures of St. Joseph, Mary and Baby Jesus. New 1-inch-thick plywood backers were crafted with a jigsaw, then glued to the figures and anchored with wood screws. Heavy L-shape stabilizing braces were screwed into the backers to give the figures sufficient weight to withstand winter winds.

Samantha J. Hanneman, David Hanneman’s granddaughter, did most of the paint restoration work. With a special set of art brushes, she applied metallic gold and flat black paint to maintain the original look. Touch up paint was applied sparingly to the faces and hands of the figures to keep the hand-drawn details.

The newly restored Nativity scene was put on display at the Hanneman home in Racine County in December 2008, making the old tradition new again for another generation. The crèche was displayed for several years, but had to again be put in storage when we lost our home.  Now the figures again wait patiently to have a new home where their warm glow will fill the Christmas night.

St. Francis of Assisi is credited with creating the first Nativity crib or crèche on Christmas Eve 1223 in Greccio, Italy. St. Francis was eager to make the birth of Christ something tangible for the faithful. He had a manger built, brought animals to be part of the set, and had Holy Mass said before this representation of the birth of Christ. After the preparations were finished, St. Francis and some of his followers went to the crèche for the Mass. After a short prayer by Francis, a vision of the Christ child appeared on the hay. The miracle stirred the animals and greatly moved the faithful who witnessed it.

The original Nativity scene as built by David D. Hanneman, circa 1967.

The Nativity scene is visible at center. On the driveway is David C. Hanneman, 3. 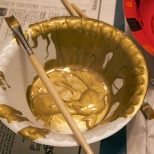 Care was taken to maintain the original details. 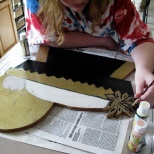 It was slow, painstaking work retouching the Nativity figures.