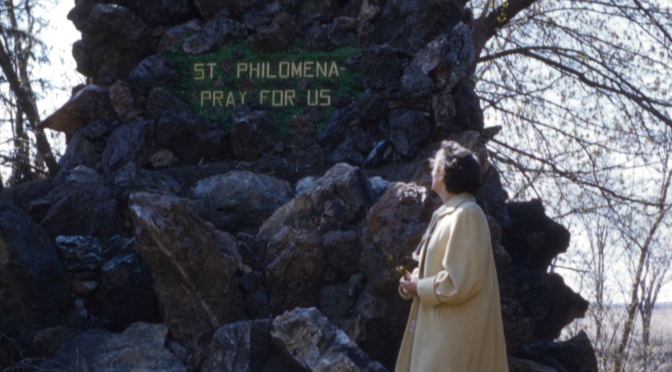 As many times as I’ve traveled to central Wisconsin, I was not aware of a beautiful, sprawling religious shrine built by a Catholic priest in thanksgiving for having his health restored after a visit to Lourdes, France in the early 1900s. The Rudolph Grotto Gardens near Wisconsin Rapids were the dream fulfilled of Father Philip Wagner, who developed and dedicated the site to the Blessed Virgin Mary in 1927.

I learned of Rudolph Grotto Gardens while researching a photo of my grandmother, Ruby V. Hanneman, standing near a statue of St. Philomena in 1958 or 1959. St. Philomena, who was martyred at age 13, is known as the Patroness of the Living Rosary. Her shrine at Rudolph Grotto Gardens was built in 1957 by Edmund Rybicki, Father Wagner’s right-hand man.

The first grotto shrine at the Rudolph site, dedicated to the Our Lady of Lourdes, was completed in 1928. When a young and sick Philip Wagner visited the famous shrine at Lourdes, he promised the Blessed Virgin Mary that if he were healed of his illnesses so he could become a priest, he would build a shrine to her in America. And so he was healed, and was ordained a priest in 1915. He was assigned to St. Philomena Catholic Church in Rudolph in 1917.

Over the years, the site expanded to include the Stations of the Cross, the Ten Commandments, a Last Supper Shrine, A “Wonder Cave” modeled after the catacombs, a Shrine of the Resurrection, a soldier’s monument and more.

Father Wagner and Rybicki labored on the site for decades. After Father Wagner died in 1959, Rybicki became the site caretaker. In 1961, St. Philomena Church was rededicated and renamed St. Philip the Apostle in honor of Father Philip Wagner. The last project at the grotto gardens was finished in 1983. Read more about the site here.