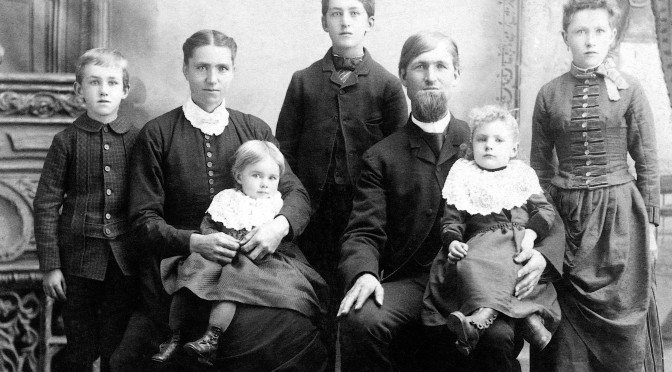 He came to the United States at age 19 and lived the life of an American frontiersman: shuttling cargo between U.S. outposts in the West and ferrying people and goods across the Missouri River. For all of his adventurous living, William Johann Heinrich Gaulke retained one lasting memory that his family in Wisconsin still talks about: being a friend of a very young William Frederick ‘Buffalo Bill’ Cody.

Gaulke met the famed U.S. Army scout and buffalo hunter while Gaulke was working and exploring the frontier lands in Nebraska and the Dakotas in the 1870s. A photograph in the Gaulke family album shows a twenty-something Gaulke standing with his arm around a seated William Cody.

Gaulke’s frontier experience grew out of tragedy he experienced in his native Germany. Born on October 1, 1848, Gaulke lost his father, John, before he turned six months old. When he was 11, Gaulke became an orphan at the death of his mother Fredericka. He emigrated to America in 1867 and landed in Milwaukee. After a short stint as a farmhand, Gaulke landed a job aboard a Great Lakes steamer, where he learned to speak English. After another stint working on farms in Illinois, Gaulke went west.

Gaulke experienced the wilds of the frontier lands as a teamster for the U.S. government. He guided a six-mule team hauling goods between U.S. Army posts. He was based at Fort Buford in the Dakota Territory. After tiring of that job, he built a skiff and drifted down the Missouri River to what is now Bismarck, North Dakota. Along with a group of companions, he established the town of Carlington. There, Gaulke operated a ferry moving people, goods and horses across the Missouri River near Fort McKeen (later called Fort Abraham Lincoln). Fort Lincoln was the base of Gen. George Armstrong Custer.

Right alongside the Mighty Missouri River, Gaulke built himself a shanty, where he lived and operated his ferry business. He built an outdoor fireplace that was used for cooking and warmth. It was also a hiding place for the $2,200 Gaulke had saved from his business ventures. Gaulke’s shanty was a frequent target of would-be thieves, but none of them ever thought to look under the fireplace for the buried money.

In 1872, Gaulke returned to Wisconsin, securing work at Grand Rapids in Wood County. In July 1876, he married Augusta Henriette Charlotte Kruger. Her mother, Friedericke Kruger, was the daughter of Matthias Hannemann (1794-1879). A short time later, the Gaulkes bought their first land in the Town of Grant in Portage County, very near where the Hannemann family established its first homes in the early 1860s. Gaulke cleared the land and established a successful farm. He also helped build many of the farm houses and barns in the area.

Gaulke also became deeply involved in civic work, serving as school district clerk, drainage district commisioner and chairman of the Town of Grant. He and Augusta had eight children, born between 1878 and 1897. Augusta died in 1914, four years before her mother. William died on October 25, 1928 after coming down with pneumonia.

Confirmation of the friendship between Gaulke and Buffalo Bill came in the early 1900s, when Cody brought his Wild West show to Grand Rapids, Wisconsin. Gaulke brought his youngest son, John, to the grounds near Lincoln High School. They watched the white-suited Cody ride about the arena on his white horse. Gaulke led his boy up to Cody, introduced himself and asked the showman if he remembered him from their time out west decades earlier. He did. “Why sure, Bill and they had quite a talk,” John Gaulke later wrote. “Finally Buffalo Bill reached into his pocket and gave my Dad a handful of tickets, who the whole family saw the show for nothing.”

William Cody was a first-rate Indian scout and buffalo hunter whose life was romanticized in dime novels written by author Ned Buntline. The pair collaborated to create a show called “The Scouts of the Plains.” In 1883, Cody developed a live show spectacular called Buffalo Bill’s Wild West. The Library of Congress says Cody “was a major contributor in the creation of the myth of the American West, as seen in Hollywood movies and television.”