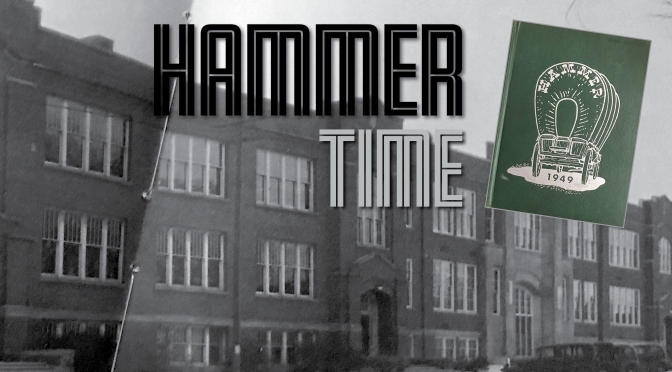 High school yearbooks are an excellent source for family historians to find sometimes-hidden facts and images from a loved one’s past. And as I discovered with my late father’s copy of the Mauston High School 1949 yearbook, it’s wise to stroll through the pages multiple times so as not to miss things.

Mauston High School’s yearbook is called Hammer. It was first published in 1916. Dad (David D. Hanneman) enrolled at Mauston High in the fall of 1947 and graduated in spring 1951. As we’ve noted elsewhere on these pages, he was part of the 1947 football squad that won the West Central Conference title with a 7-1 record. The 1949 Hammer covered his sophomore year.

The biggest surprise came on the page featuring the student newspaper, The Blue Quill. Dad is listed as one of two staff artists. I had viewed this yearbook before, but never noticed this. We have no issues of the The Blue Quill, so we don’t know what he and co-artist Donald Krueger sketched for the news, feature and sports pages. I’ve seen a few simple sketches and doodles he drew on the yearbook autograph pages, but nothing else. Art talent ran in the family, we covered elsewhere regarding Grandpa Carl F. Hanneman and his drawings for the Wisconsin Rapids Lincoln High School Ahdawagam.

There were no surprises in the yearbook on the athletics front, where Dad always excelled. The 1948 MHS Bluegold finished in a tie for second in the West Central Conference with a 5-1-1 record in football. The team was on pace to win its second consecutive title, but a late-season 7-0 loss to eventual champion Sparta knocked them into second. The Bluegold finished the season with a 12-12 tie with Viroqua after the visitors stormed back in the final 54 seconds to secure the draw to ruin Mauston’s homecoming.

The1949 Hammer featured a football team photo. I recalled that Dad had saved a large-format print of the photo, with many of the player names written on the back. Years ago I scanned the image (below) and even used it to promote my genealogy business.

For his sophomore year, Dad was on the B Squad for basketball. His final two years he played center on the varsity squad.

Dad was also pictured with the science club, Sigma Gamma Pi Beta. He served as vice-president during his sophomore year. It was the only year he is listed as a member of the science club.

Not surprisingly, Dad was a member of the Boys Glee Club. He enjoyed performing arts even more than athletics, and won more medals and awards for his singing than his prowess on the field and the basketball court.

Dad was among the members of the M Club, made up of winners of athletic letters. He won letters for football, basketball and track.

One of the most touching things in all of Dad’s yearbooks was the autograph left each year by his younger sister, Lavonne. Dad was four years older and took seriously his job of protecting Vonnie. They had a special bond. Here she wrote a tribute note, erased it and penciled in another one, circled by a heart. After her 1986 death at age 48, Dad told me these notes held very special meaning for him.

Below is one of the frequent doodles found in Dad’s yearbooks. He was part of a double quartet that competed every year in Wisconsin School Music Association events. 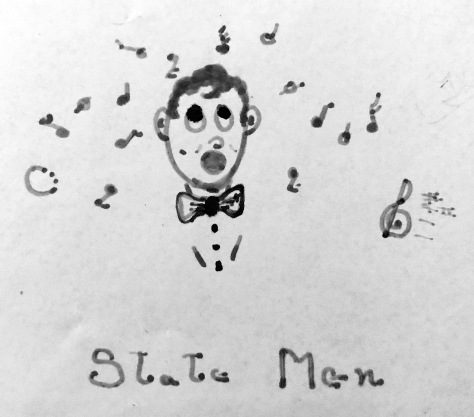 Top Photo: Mauston High School as it appeared in the center spread of the 1949 yearbook. The yearbook cover design is shown upper right. 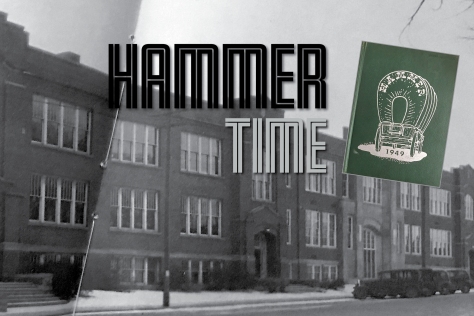