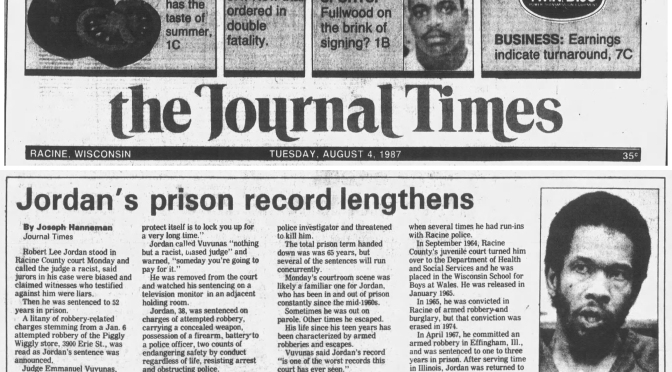 This article appeared on Page 1 of the Aug. 4, 1987 issue of the Racine Journal Times.

Robert Lee Jordan stood in Racine County court Monday and called the judge a racist, said jurors in his case were biased and claimed witnesses who testified against him were liars.

Then he was sentenced to 52 years in prison.

A litany of robbery-related charges stemming from a Jan. 6, 1987 attempted robbery of the Piggly Wiggly store, 3900 Erie St., was read as Jordan’s sentence was announced.

Judge Emmanuel Vuvunas, after listening to a blistering verbal attack from Jordan, said, “The only thing society can do to protect itself is to lock you up for a very long time.”

Jordan called Vuvunas “nothing but a racist, biased judge” and warned, “someday you’re going to pay for it.”

He was removed from the court and watched his sentencing on a television monitor in an adjacent holding room.

Jordan, 38, was sentenced on charges of attempted robbery, carrying a concealed weapon, possession of a firearm, battery to a police officer, two counts of endangering safety by conduct regardless of life, resisting arrest and obstructing police.

He was convicted in June for the robbery attempt, in which he struggled with an off-duty Racine police investigator and threatened to kill him.

The total prison term handed down was was 65 years, but several of the sentences will run concurrently.

Monday’s courtroom scene was likely a familiar one for Jordan, who has been in and out of prison constantly since the mid 1960s. Sometimes he was out on parole. Other times he escaped.

His life since his teen years has been characterized by armed robberies and escapes. Vuvunas said Jordan’s record “is one of the worst records this court has ever seen.”

According to court records, Jordan’s problems with the law began between 1961 and 1974, when several times he had run-ins with Racine police.

In September 1964, Racine County’s juvenile court turned him over to the Department of Health and Social Services and he was placed in the Wisconsin School for Boys at Wales. He was released in January 1965.

In 1965, he was convicted in Racine of armed robbery and burglary, but that conviction was erased in 1974. In April 1967, he committed an armed robbery in Effingham, Ill., and was sentenced to one to three years in prison. After serving time in Illinois, Jordan was returned to Wisconsin and paroled in July 1970.

Less than one month later, he committed another armed robbery in Racine. While in Illinois attempting to help recover items taken in the robbery, Jordan escaped from Racine police. He was captured and in February 1971 sentenced to 12 years in the Green Bay Correctional Institution.

In February 1973, Jordan was transferred to the State Farm in Union Grove. Eleven months later, he escaped from the farm. A 2½ year sentence for the escape was stayed and Jordan received probation.

He was again paroled on Nov. 19. On Nov. 20, 1974, Jordan was arrested and charged with committing armed robbery while an escapee from the Union Grove farm. Charges in that incident were considered later in a separate case. Three months later, Jordan committed armed robbery in Janesville and was sentenced to 10 years in prison, with a six-month jail term to run concurrently.

Jordan was sent to Oakhill Correctional Facility in Dane County. On Aug. 31, 1978, he escaped. Eventually he turned up in Avon, Mass., where on Dec. 1, he robbed a bank. He was charged with kidnapping, three counts of assault with intent to commit murder, assault and battery, use of a dangerous weapon, armed robbery and unlawful carrying of a firearm.

He was sentenced to six to 15 years and sent to the Massachusetts Correctional Institution at Walpole. On Dec. 15, 1986, he was paroled and returned to Wisconsin. On February 25, 1986, Jordan was released from prison on his mandatory release date for the 1975 robbery.

Jordan represented himself during the trial, which became characterized by his flashes of hostility toward Vuvunas, Assistant District Attorney Eric Guttenberg and the jury.

He said the case was decided by an “all-white, biased jury.” Referring to witnesses who testified against him, Jordan said, “All these people came and lied.”

But Vuvunas got the last word.

Vuvunas, citing Jordan’s extensive criminal record, said it is clear the only choice was to impose a stiff prison term.

“This court has to make sure that a person as dangerous as you be kept out of the community for a very long time.” •

EPILOGUE: Jordan remains incarcerated at the Stanley Correctional Institution in Chippewa County, Wis. He filed a number of lawsuits from prison, one seeking $2 million from the Racine County district attorney, the Wisconsin attorney general and the head of the Wisconsin Department of Corrections. A federal judge denied his motions for damages and early release from prison.