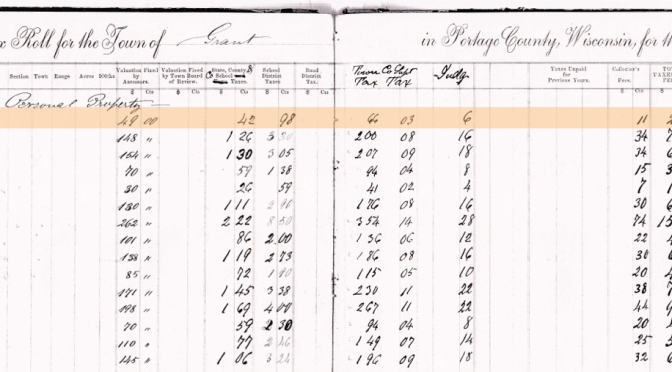 We have further evidence that our earliest Hanneman ancestor to come to Wisconsin went by the name “Martin” rather than his given legal name of Matthias.

The 1868 tax roll for the Town of Grant in Portage County says Martin Hannemann had property with an assessed value of $49.00. On that amount, he paid a tax of 98 cents for the school district, 66 cents for the township and 62 cents in other local taxes. His total tax bill was $2.26.

This is at least the third piece of evidence that Matthias Hannemann was known by the name Martin. On the 1870 U.S. Census he is listed as “Mart Hannemann. His name was also listed as Martin in a newspaper obituary for one of his children.

The tax document also establishes that Matthias was in America as early as 1868. We have yet to locate documentary evidence of his emigration from Kreis Regenwalde, Pomerania. We know two of his daughters came to Wisconsin in 1861.

[Update: Since this post was originally published, we found the 1866 emigration records for Matthias (Martin) Hannemann]