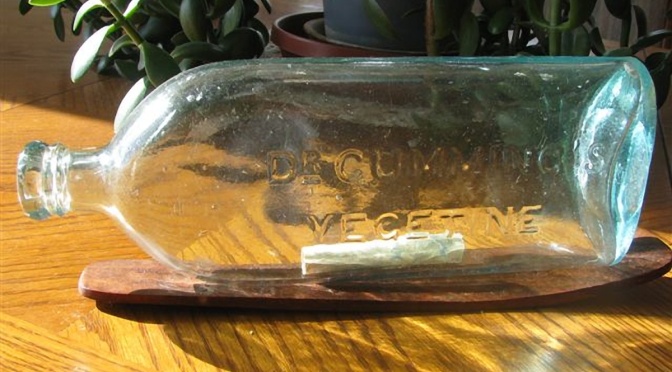 Like most hard-working farmers of his day, Frederick Krosch spent a lot of time toiling in the fields. First in Germany and then on an 80-acre farm north of the village of Mukwonago in Waukesha County, Wisconsin.

It’s amazing to realize that the water bottle he carried with him into the fields has survived to this day, more than 130 years after his death. The glass bottle, embossed with lettering that reads “Dr. Cummins Vegetine,” has been in the possession of Bonnie (Treutel) Young, the elder Krosch’s great-great granddaughter.

Bonnie has had the bottle on display at her home, but only recently removed a handwritten note that had been placed inside in 1944.The note reads: “This is the bottle in which our grandfather Krosch, ‘mother’s father,’ used to take drinking water to the fields with him. It’s perhaps near 100 years old.”

As documented in a previous article,the Krosch family came to America inJuly 1854 and settled into farming in Waukesha County. Frederick Krosch farmed 80 acres of land that is now home to a bank and a Culver’s restaurant. The Krosch farm was adjacent to land owned by Judge Martin Field, for whom Field Park in Mukwonago is named. Krosch’s farmland was valued at $1,500,according to the 1870 U.S. Census.

Krosch continued his farming as his daughter Henrietta marriedblacksmith Philipp Treutel and started her own family. The elder Krosch died Aug. 7, 1876. He is buried at Oak Knoll Cemetery in Mukwonago. 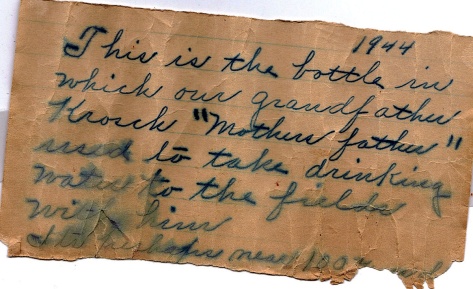 As for the original contents of that bottle, Vegetine was sold for years as a “blood purifier.” It laid claim to curing and preventing maladies from pimples to cancer and neuralgia to “female weakness,” gout and sciatica. Vegetine was made from bark, roots and herbs.

Given Vegetine’s wild curative claims, perhaps Frederick Krosch figured out he was better off sticking to water.