A remarkable photo recently surfaced showing a tie-clad, suspender-wearing Charles Frederick Christian Hanneman, one of the pioneers of the Hanneman family of north central Wisconsin.

The color photograph, which appears to date to the late 1920s, shows an aging Charles Hanneman wearing his Sunday best. He appears to be standing next to some kind of canal that was used for swimming. 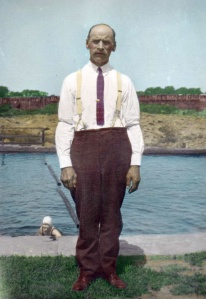 It is an important visual clue to the life of this Pomeranian immigrant who came to America at age 16 and built a new life for himself in and around Grand Rapids (now called Wisconsin Rapids).

For a retrospective on the life of Charles Hanneman (1866-1932), read this 2008 article from The Hanneman Archive.