The 1947 football campaign was destined to be one for the ages at Mauston High School. The photo gallery below could be from that championship season, based on the youthful appearance of my Dad, David D. Hanneman (1933-2007). Dad was a starter for the Mauston Bluegold, even in his freshman year.

Dad played guard and tackle throughout his high school football career. But as is the case on small-town football teams, boys play both offense and defense. Many of the players would switch positions, depending on the opponent and game conditions.

Mauston ran up a 7-1 record in the 1947 football campaign, gaining them a share of the West Central Conference championship crown. Mauston was 3-1 in conference play. Midway through the season, Mauston ranked as one of the state’s highest-scoring teams. Here’s the 1947 season recap:

Bob “Jigger” Jagoe, who played quarterback for Mauston starting in the 1948 season, recalls how Dave’s mother, Ruby V. Hanneman, was zealous in her cheering.

You could hear her in the stands, shouting. She was so proud. Of course we used to kind of make a mockery of it, because she was so adamant, letting everybody know who her son was out there who made the tackle. They announced, ‘Tackle made by Dave Hanneman’  and she said, ‘That’s my Davey!’

In the 1950s, home football games were played at Veterans Memorial Park on the south end of Mauston. This locale looks much closer to downtown, so I’m betting these 1940s games were played in Riverside Park along the Lemonweir River. In several of the photos you can see the distant spire of St. Patrick’s Catholic Church.

— This post has been updated with quotes and other information.

Dave Hanneman can be seen in the last row at left, second in from Coach McKenzie. Bob Jagoe is on his left. Front and center (91) is Dick Hale.

A great view of the crowd at Riverside Park in Mauston. 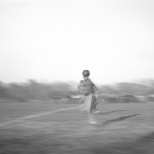 It’s not clear if this galloping ghost is David D. Hanneman. He usually played at the line.

The Mauston Bluegold huddle before the play.

This appears to be a victory celebration.

Game action from this 1947 football contest at Mauston.

A good look at the spectators at Riverside Park. Recognize anyone?

Game action from this 1947 football contest at Mauston.

Another group shot of the team. On this one, Dave Hanneman (back row left, second from coach) has his tongue sticking out. Front and center (91) is Dick Hale. 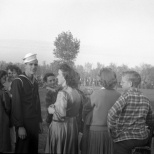 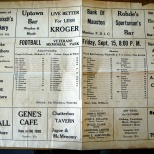 A Mauston game program from September 1950. Note the team plays at Veterans Park instead of Riverside as in earlier years.