A battalion chief with the Racine Fire Department, Peterson was on his way to St. Mary’s Medical Center on a routine call that night. En route, he noticed a sharp pain in his groin, a pain that steadily worsened. By the time he arrived, he needed medical attention.

Doctors who examined him originally thought he was suffering from torsion, a painful twisting of the vas deferens leading from the testicles. But efforts to relieve the pain were useless.

Peterson underwent exploratory surgery that night at St. Mary’s. He was under local anesthetic and was able to ask the surgeon what he saw. There were lumps on one of the testicles, he was told, and it could be cancer.

Surgeons removed the diseased testicle, which they believed was the original site of the cancer. He went home the next day, still reeling from the diagnosis.

Smoke inhalation a factor?
Peterson did not smoke and he wondered how he could develop such a rare cancer, which strikes about 130 Wisconsin men a year. But he recalled his early days in the fire department, days when “you were a candy ass” if you wore an oxygen mask to a fire scene.

More than once, he recalled coughing up black phlegm after coming out of a fire. Now, he wonders what those early days did to him.

Peterson was admitted to the Mayo Clinic in Rochester, Minn., where doctors put him through a battery of tests. The news was not encouraging. The cancer had spread to Peterson’s lungs and the tumors were growing fast.

“They had grown from the size of the head of your pen to the size of a small orange in three weeks or so,” he said.

Doctors decided to attack the lung tumors with chemotherapy. Peterson returned to Racine and went on a regimen of chemotherapy. One week of treatments was followed by three off weeks to let his body recover.

Peterson lost his hair from the nauseating treatments, but he decided to go back to work at the fire department, where he was in charge of training programs. Being at work was therapeutic.

“I found if I sat at home, the only thing I could think about is, ‘Am I going to die?’ ” he said. “I needed a diversion. That diversion was going to work.”

Diversion is not all he found at the fire department. He also found inspiration and the will to keep fighting.

Heroic inspiration
The source of the inspiration was Dan Christensen. Christensen was always the first to greet Peterson and ask him how he was doing. Christensen told him things would work out, he’d be OK.

“It was just remarkable, a person could take life, so little of which he had left, and still give so much to the people he had around him,” Peterson said.

Even as Christensen lost his motion control as his muscles deteriorated from the disease, he kept up the pep talks for Peterson. He visited him in the hospital and always had an encouraging word. He may not have known it at the time, but Christensen, who died in August, helped save his friend’s life.

“He made me keep on fighting,” Peterson said. “That’s a major part of beating cancer. You have to take one day at a time.”

There was plenty of fight ahead for Jeff Peterson.

The nausea and vomiting from chemotherapy put him back in the hospital. He developed blood clots in his lungs. Then, he developed a fungus-like disease in his lungs that put his life in jeopardy.

He remembers that meeting with doctors well. The combination of complications could be fatal. The doctor had tears in his eyes.

“ ‘You’re not rid of me yet,’ ” Peterson said he told the doctor. “I made up my mind I was not going to be that statistic. I was going to be a statistic on the positive side.”

Doctors started treating the lung fungus with steroids, but the going was still rough. Peterson got angry when some of his visitors treated him like he was a sure bet to die.

No giving up
There were a few times in the hospital, when he was weary from the chemotherapy, that Peterson felt like giving up. Dying. But then sleep would come for a few hours, putting a little more fight in his soul.

By late 1985, Peterson turned the corner on his disease. The tumors responded to therapy and the fungus was subsiding. Peterson was winning.

That was six years ago. Peterson has been cancer-free ever since. The disease challenged him and nearly killed him, but it also gave him a sense of how precious life is.

“Cancer gives you a new outlook on life. Every day to me is a bonus,” he said. “I used to take a lot more things more seriously than I do now. You know the time here is so short, you should make the best of it every day.”

These days, Peterson spends part of his time delivering talks to high school boys about testicular self-exams, something even he was ignorant about before he got cancer.

“It’s a subject not many kids want to talk about, but it’s got to be done,” he said. “That’s one of the points I was extremely angry about. My own physician never told me to do a testicular exam.”

He also spends time whenever called upon to help cancer patients adjust to the disease. He won’t let them give up, just like Danny Christensen wouldn’t let him give up. One man he saw recently was ready to throw in the towel, but Peterson convinced him it was worth the fight. The man is doing fine now.

“That’s one of the boosts that makes me smile every day,” he said. •

EPILOGUE: Peterson retired from the Racine Fire Department in early 1999 after more than 30 years as a firefighter, including a stint as chief. 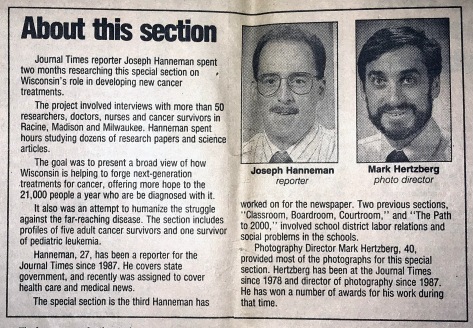