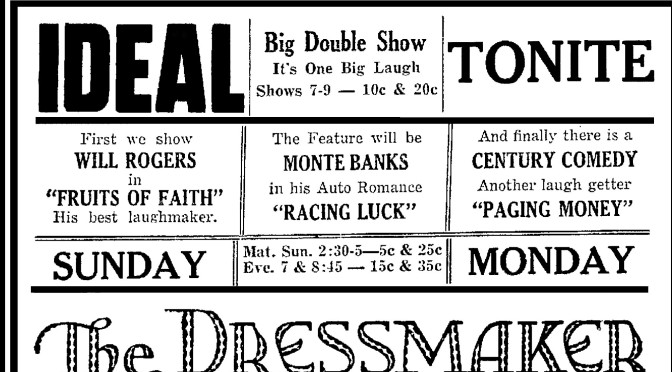 When was the last time your visit to the Cineplex included live entertainment? (The bratty 5-year-old in front of you throwing popcorn at his brother does not count.) The movie theater was once about much more than movies, and the price of admission included live performances, newsreels, comedy shorts and more. For years our own Ruby V. Hanneman was a featured performer at some of Wisconsin Rapids finest cinemas, and her name appeared in ads right alongside Silent Era stars of the day like Neal Hart, Ricardo Cortez, Doris Kenyon and Jack Holt.

Ruby often appeared at the Ideal Theatre at 220 E. Grand Ave., Wisconsin Rapids. She sang a “musical novelty” at two shows on Halloween night 1925. The main attraction was The Thundering Herd, a movie based on the 1925 novel by Zane Grey. (Zane Grey happened to be a favorite author of Carl F. Hanneman and his son David, but we digress.) Seats that night were just 10 cents or 25 cents, half off the typical ticket prices.

On Thanksgiving 1925, Ruby sang for the audience at Paramount Pictures In the Name of Love, starring Ricardo Cortez and Greta Nissen. Ruby sang two numbers, “Lonesome, That’s All,” and “In the Garden of Tomorrow.” The 15 cent and 35 cent admission also included the Wisconsin Rapids Quintette, newsreels and a Will Rogers comedy.

Ruby got perhaps her most prominent billing for the October 17, 1925 showing of The Spaniard. Her name was most prominent in the ad in the Wisconsin Rapids Daily Tribune. “Added Attraction, Mrs. Ruby Hanneman in a Musical Novelty, Please, the ad read. On Aug. 25, 1925 she appeared at the New Palace Theater singing, “I Wonder What’s Become of Sally.” The feature film that night was Born Rich starring Bert Lytell and Claire Windsor.

By the time she starred at the New Palace and the Ideal, Ruby was a veteran singer. According to the April 4, 1921 edition of the Daily Tribune, Ruby Treutel “brought down the applause of the house time after time” for her performance in the play “The Fire Prince” at Daly’s Theater. Ruby was 17 at the time.

When she graduated from Lincoln High School in Wisconsin Rapids in 1922, Ruby had years of experience in music and drama. She played the female lead in the operetta Sylvia during her senior year. She was also president of the Glee Club. Under her senior class portrait in the yearbook The Ahdawagam read the motto, “Music hath charms and so does she.”