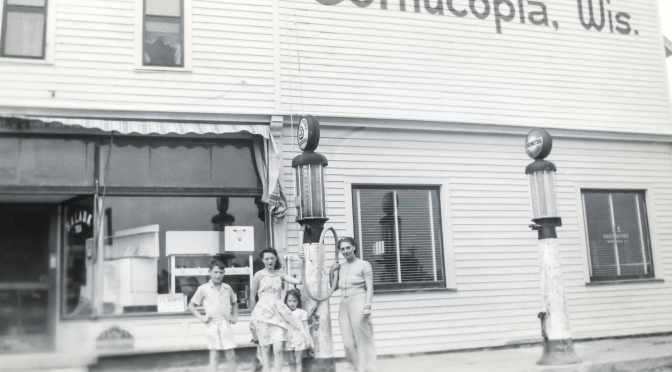 Sometimes identifying the location show in old photographs is easier than others, like the giant lettering, “Cornucopia, Wis.” in this photo from around 1942. Such a small detail, but it turns out there is quite a story behind the Hanneman family’s time in this northern Wisconsin area on Lake Superior.

You can’t get much farther north in Wisconsin than Cornucopia, an unincorporated hamlet on Siskwit Bay in Bayfield County. And that was just the point for Carl and Ruby Hanneman, who took my Dad to Bayfield County every summer to escape his crippling hay fever suffered around the family home at Mauston, Wisconsin. In August 1940, Ruby placed a classified ad in the Wisconsin Rapids Daily Tribune seeking a travel companion to share expenses. The older girl in the photo above is unidentified, but she is too young to be an adult’s travel companion.

It appears Ruby took my Dad and his little sister Lavonne to Bayfield County in late summer when pollen counts were especially high in Mauston. Dad’s allergies were so bad, he suffered from nonstop sneezing, runny nose and watery eyes. The  hay fever was truly debilitating, so the family went far north until the seasons started changing. The area is popular with summer tourists, so the family had their pick of cottages and cabins in which to take up residence.

They treated the annual trek as a vacation, allowing siblings Donn, David and Lavonne Hanneman to see attractions such as the Apostle Islands National Lakeshore and its world-class array of lighthouses. Other destinations included the beautiful Madeline Island, accessible by car ferry or boat. One of my favorite photos of my Dad shows him digging his toes in the sand on Madeline Island (see below). I guess if you have to suffer through horrendous allergies, you might as well get some vacation out of it!

David Hanneman on the shoulders of big brother Donn. To the side is Lavonne Hanneman

David with little sister Lavonne outside a cottage in Bayfield County, Wisconsin.

Carl F. Hanneman with children Lavonne and David, in Bayfield County, circa 1942.

Lavonne and David Hanneman play on the shore of Lake Superior in Bayfield County, Wis., circa 1940.

David D. Hanneman with his toe in the sand at Madeline Island, circa 1942.

Professional writer, history sleuth and lover of family. "I don't live in the past, but it's a great place to visit."