One beautiful young lady truly stands out among the 160 pages of the 1922 Ahdawagam. What is an Ahdawagam, you ask? It is the name of the school annual, or yearbook, at Lincoln High School in Wisconsin Rapids. Ahdawagam is an Indian word that refers to the “two-sided rapids” along the Wisconsin River.

The specially featured young lady was touted for her musical talents and participation in a wide range of student activities. She is Ruby V. Treutel (1904-1977) of Vesper, Wis., before she became Ruby V. Hanneman as the bride of Carl Henry Frank Hanneman (1901-1982).

It is indeed a treat to stroll through the pages of this early 1920s book, 98 years after it was published. It was a very different era, and these young people seem so mature and serious. Although maybe that is because we came to know them much later in life.

Ruby’s first appearance in the book is near the front, in the senior portrait section. Right between Irene Timm (“Timmy”) and Florence Van Dyke (“Flo”). No nickname is mentioned for Ruby. The listing has five lines describing her school activities: Glee Club, Ahdawagam staff 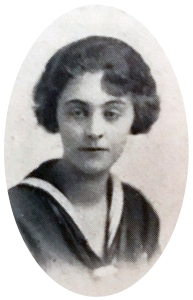 member, Dramatic Club, Mask and Wig Club (founding member), Gamma Sigma musical society, and a performer in the school operetta for three years. Ruby’s slogan certainly fits the woman we came to know: “Music hath charms and so has she.”

She is next listed in the “Class Mirror” section. Her answers included: Heart = Carl; Mind = Church’s (pharmacy where Carl worked); favorite occupation = singing; wants to be = opera singer; and “ought to be” = second Galli Curci. The last item is a reference to

Amelita Galli-Curci, the Italy-born coloratura soprano who was an acclaimed opera singer in the early 20th century.

A few chapters later, in the Music and Drama section, we find Ruby’s stronghold. She was president of the 87-member Glee Club, which encourages development of musical talent. The club also performs an operetta each year.

Just pages later we find Ruby in the group photo for Gamma Sigma, which draws the most musically talented students in the school. She was among the founding members during the 1921-22 school year. The group offered regular public singing and instrumental performances.

Ruby played the lead role in the Glee Club operetta production of Sylvia. The club and the performance were directed by Elizabeth Bradford, Lincoln High School’s musical supervisor.

The operetta was no small-time school production. It received a preview article on the society page of the Wisconsin Rapids Daily Tribune on Jan. 17, 1922.  Sylvia was originally slated to be performed at Daly’s Opera House in Wisconsin Rapids. Two weeks before opening night, the opera house burned to the ground. Firefighters were hampered because the hydrants near the opera house were frozen and water had to be pumped from the Wisconsin River. The fire forced the operetta production to relocate to Lincoln High School for the Jan. 27 performance.

The Daily Tribune published an extensive review in the Jan. 28 issue. The reviewer sang the praises of Ruby and her co-performers. “Miss Ruby Treutel scored in the title role, as the haughty sweetheart of the court poet. As an actress, she showed unusual ability in every situation,

“but it was as a singer that she won the hearts of the crowd completely.”

Ruby shined with her rendition of “Unto Thy Heart” with a violin obligato by Esther Levin. The number “seemed to appeal to her listeners especially, for they accorded her enthusiastic and well-deserved applause,” the Daily Tribune review said.

We’ve documented elsewhere on this site the musical talents of Ruby Treutel Hanneman. She performed in various theaters, starting when she was just 17. In April 1921, Ruby “brought down the applause of the house time after time” with her performance in the play “The Fire Prince,” according to the Daily Tribune.

Ruby’s next yearbook appearance is on a photo-collage page. She 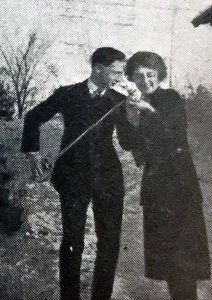 and future husband Carl are doing some kind of goofing around. The photo isn’t real clear, but it appears Carl is either playing some kind of stringed instrument or wielding a fishing pole or a sword. See what you think. Many of the photos in the collage seem to be related to the operetta.

It is impressive to see how dressed up these students are on every page of the yearbook. Ladies in dresses and the young men in suits and ties. Fashion was the rule of the day.

Finally, Ruby is pictured among 17 members of the Ahdawagam yearbook staff. She served as editor of music and drama.

Ruby’s final mention in the book is on a list under the heading “The Great White Way.” All of the people on the list were described as lights (“head light,” “flashlight,” “candle,” etc.). Ruby is listed as “Star Light.”

Carl gets the last word. He appears in the alumni section, where he is listed for his job as a druggist at Church’s Drug Store. Carl graduated from Lincoln High School in 1921.

The staff box for the yearbook says it was Vol. 10 for the Ahdawagam. The editor-in-chief was Viola J. Nash. The book was produced by the Hein-Sutor Printing Company of Wisconsin Rapids.