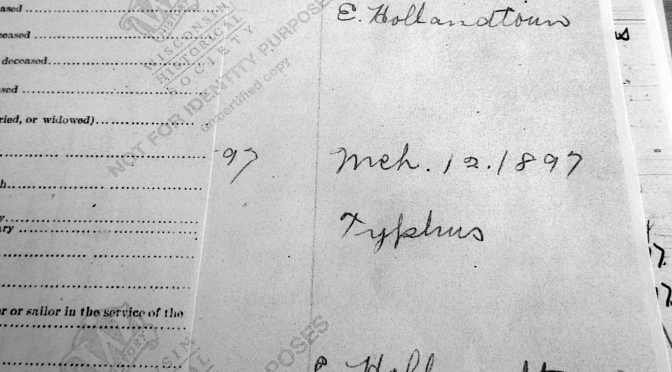 Bridget Elizabeth (McQueen) Chase, the mother of Earl J. Mulqueen Sr. (1895-1965), died of typhus on March 12, 1897, just two weeks after giving birth to her daughter Elizabeth. That fact is revealed in a death certificate just received from the Wisconsin Historical Society in Madison.

The death certificate says Elizabeth was just 20, much younger than the age listed in her newspaper obituary. That is most likely an error, as the 1870 U.S. Census puts her birthdate at about 1866. That means she died at about age 31. Two weeks prior to her death, on February 26, 1897, she gave birth to daughter Elizabeth in Green Bay. Earl was just over 2 years old when his mother died.

Typhus is a bacterial disease characterized by a rash, fever, cough, headaches, rapid breathing and confusion. Before the widespread availability of antibiotics such as doxycycline, typhus was often fatal. The disease has several forms, although the most common form was spread by body lice. It is different than typhoid fever.

The Brown County death certificate helps shed a little more light on Elizabeth’s story. Until recently, we had no idea who Earl’s mother was. Earl was raised on his grandparents’ farm near Askeaton, Wisconsin after the death of both parents. He took his mother’s maiden name. His father, Charles Henry Chase, is still largely a mystery — one we hope to solve with help of Charles and Elizabeth’s marriage certificate. The couple were married on September 4, 1894, about four months before Earl’s birth. Earl was said to be born in Marinette, while his sister Elizabeth was born in Green Bay. The young Chase family was living in Green Bay at the time of Bridget Elizabeth’s death.

While progress has been made, the mysteries keep piling up. St. Patrick’s Catholic Cemetery in Askeaton has no record of Bridget Elizabeth McQueen Chase’s 1897 burial. Her newspaper obituary clearly states her funeral was at St. Patrick’s church. No burial records seem to exist for four other members of the Askeaton McQueen family, including Mary (Corcoran) McQueen (1827-1913), Thomas McQueen (1855-1913), James McQueen (1853-unknown) and Daniel McQueen Jr. (1865-1926). Newspaper obituaries for most of those individuals state that the funerals and/or burials were at St. Patrick’s in Askeaton. A planned visit to the cemetery could clear things up, but right now there does not appear to be a paper trail for those burials.

We do know the burial locations of the other two children of Daniel and Mary McQueen / Mulqueen. Michael McQueen (1860-1947) is buried in Norway, Dickinson County, Michigan. He lived much of his adult life in Vulcan, Michigan. Mary (McQueen) McCaughey (1868-1945) is buried with her husband in Huron County, Ontario, Canada.

Key questions that still need answers regarding Earl and his ancestors: