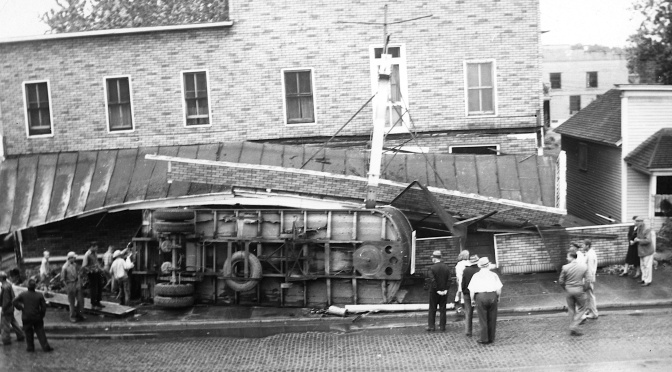 It was the moving definition of a close call. A semi-trailer truck being driven by John N. Post flipped over in late June 1946 and slid right into the front of the Tourist Hotel on State Street in Mauston, Wisconsin. The semi ripped off the hotel’s screened porch and pushed it down the block.

Breaking glass exploded into the only unoccupied room at the inn. The room’s regular resident, a truck driver himself, was away on vacation. Post, 25, told police that he pulled out in order to pass a car driven by Charles A. Petrowitz, 15. Petrowitz started to make a left turn, forcing Post to veer and lose control of the truck. Post was treated at the Mauston hospital and released. No citations were issued in the accident. In addition to building damage, the truck also knocked over a light post, a mailbox and a fire hydrant.

The photos were taken by Carl F. Hanneman for The Wisconsin State Journal, which ran two images and a short story on its State Page on June 25, 1946.