Carl F. Hanneman’s college pharmacy notebooks and study guides from 1924 and 1925 have been donated to the Department of Special Collections and University Archives at Marquette University in Milwaukee. The material was turned over to the university and accession papers signed May 26, 2017.

It was a long road for the college pharmacy materials, kept by the senior Hanneman at homes in Wisconsin Rapids, Janesville, Fond du Lac and Mauston. When Carl died in May 1982, the papers went to his youngest son, David D. Hanneman (1933-2007). Now, more than 90 years after they helped Carl become a registered pharmacist, the papers will be preserved by Marquette.

Carl earned his licensure in January 1925 after completing Marquette’s short course in pharmacy. He went on to a pharmacy career that spanned nearly 60 years, much of it behind the counter at the Mauston Drug Store.

The handwritten notes are unique because Marquette previously had little documentation of its popular short course in pharmacy. The university’s degree program in pharmacy was discontinued during World War I because so many faculty and students left campus to fight overseas. The pharmacy degree program was never restarted, but demand continued for higher education to help students pass that state pharmacy board exams.

In 1923, Marquette began offering a “short course” in pharmacy under the auspices of the College of Dentistry. The courses in chemistry, organic chemistry, pharmacy, pharmacognosy, toxicology and drg identification were rigorous. They were taught by Dr. Hugh C. Russell and Professor Frederick C. Mayer, both former deans of the Marquette College of Pharmacy. The two-semester program was designed for young men and women with pharmacy experience, in preparation to pass the state exams.

The books Carl left behind contain hundreds of pages of meticulous notes on chemistry, pharmacy and related subjects. Two of the books have Marquette pennant stickers on the front. Carl’s pocket-size copy of the Guide to the Organic Drugs of the United States Pharmacopœia has a Marquette University seal on the cover. His exam book shows he scored an 82 percent on one test in 1924.

Carl (1901-1982) would no doubt be tickled to know his college work will be preserved in the archives of his alma mater. We think his son David would be rather proud, too.

– Listen to David Hanneman’s Remembrances of His Father’s Pharmacy

This 1916 pocket formulary book has the Marquette seal on the cover.

Two of the hardcover notebooks have remnants of Marquette pennants. 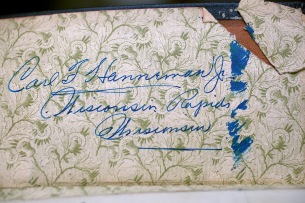 Carl wrote his name and home address inside his notebooks.

Relief for chest and head colds.