The essence of wintergreen that wafted out the windows onto Division Street in Mauston, Wisconsin. Bottling and selling hand-crafted mosquito repellent at taverns and resorts across northern Wisconsin. Filling pills behind the pharmacy counter as a child. In this installment of audio memories, Dave Hanneman (1933-2007) remembers the work of his pharmacist father, Carl F. Hanneman (1901-1982). This interview was recorded in mid-November 2006 at St. Mary’s Hospital in Madison, Wisconsin.

Carl F. Hanneman printed his own labels and wrote the ad copy for Stay Off.

Carl F. Hanneman taking his suits to the cleaner at Janesville, Wis., on April 5, 1926. Carl and his wife, Ruby V. Hanneman, were on their way to dinner. Carl was a druggist at McCue & Buss Drug Co. at the time.

Christopher Marshall, an Irish immigrant, established his apothecary shop in Philadelphia in 1729. During 96 years, this pioneer pharmaceutical enterprise became a leading retail store, nucleus of large-scale chemical manufacturing; a “practical” training school for pharmacists; an important supply depot during the Revolution; and finally, it was managed by granddaughter Elizabeth, America’s first woman pharmacist. Christopher earned the title of “The fighting Quaker” during the Revolution; his sons, Charles and Christopher, Jr., (shown as youths with their father, about 1754) earned individual fame and carried on his fine traditions.

Carl F. Hanneman at Solomon Juneau Park in Milwaukee in 1924. 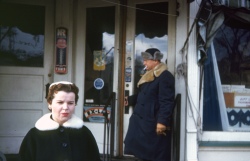 Carl Hanneman emerges from the Mauston Drug Store, circa 1958.

A sample from one of Carl Hanneman’s pharmacy notebooks.