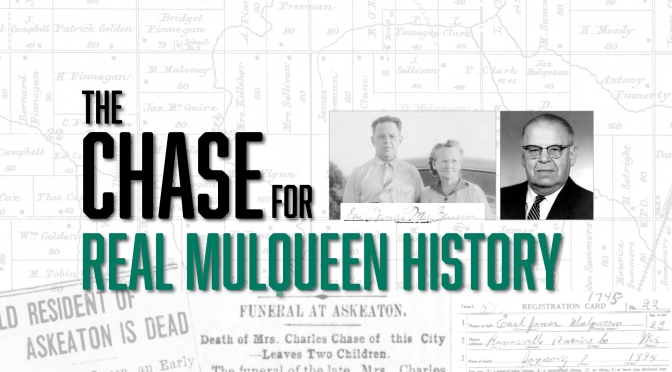 Every family historian has come up against the dreaded brick wall. Something that stops or stalls a genealogy search and prevents you from making progress in writing your family history. So it’s a joyous occasion to smash down one of those brick walls, which is just was I did this week related to my maternal grandfather, Earl J. Mulqueen (1895-1965).

I had been stymied for years trying to learn about Earl’s parents and other ancestors. The story I’d been told was that his parents both died before he was 4 years old and he was raised by two bachelor uncles on a farm near Green Bay, Wisconsin. I was able to find him and his younger sister on the 1900 and 1910 U.S. Census in the Town of Holland, Brown County. But despite years of searching, I could not find any record of his parents, who I was told were named Charles Mulqueen and Mary Chase.

Fast forward to this week. I met with two of my mom’s younger sisters, to see what information they might have about their father. Only three of 11 siblings in the Mulqueen clan of Cudahy, Wisconsin are still alive, so I was eager to finish this research now. One of the things we reviewed was a family bible originally belonging to my grandmother, Margaret Madonna (Dailey) Mulqueen (1895-1982). A small notation in the family tree section of the bible listed Earl’s parents as Charles Chase and Elizabeth McQueen. McQueen is a common spelling variant of the surname Mulqueen, and the Wisconsin branch of this family used the names almost interchangeably.

At this point, the information started to make sense. If Earl took his mother’s maiden name, it would explain my difficulty finding his parents in the records. On his 1965 death certificate, Earl’s parents were listed as Charles Mulqueen and Mary Chase. Was that information incorrect? I was about to find out. I turned to my trusty subscription to Newspapers.com, a subsidiary of Ancestry.com. I ran the obvious name searches, but turned up nothing. Then I tried a search just for the words “Chase” and “Askeaton,” the latter being the hamlet in Brown County settled by Irish families in the 1850s. Up popped a headline from the March 15, 1897 issue of the Green Bay Gazette: “Death of Mrs. Charles Chase of This City.” Bingo. One brick in the wall fell.

According to the article, Mrs. Chase died of fever after giving birth. I knew my grandfather’s younger sister was born in 1897, so this made sense. Next I turned to the Wisconsin Historical Society and its index of pre-1907 death records. Again, the typical name searches did not find anything useful. I then did a broad search for all Brown County deaths from 1890 to 1900 and manually looked through them. There I found a death record for Bridget E. Chase on March 12, 1897. Bridget? I recalled the U.S. Census records for a McQueen family in the Town of Holland, Brown County, had a Bridget listed. Her age was a close match for Bridget Chase. The Elizabeth McQueen listed in grandma’s Bible was actually Bridget Elizabeth McQueen. Boom. Down came more bricks.

I used the same search strategy with the Wisconsin Historical Society’s marriage records. I found a Charles Henry Chase who got married on September 4, 1894. This sounded promising. But when I clicked on the “search for possible spouse matches” feature on the web site, it came up blank. That usually does not happen. So I again took the long road, calling up all Brown County marriages from 1890 to 1900 and zeroing in on the letter M. There I found two matches, both with the same September 1894 wedding date as Charles H. Chase. The first was for “Bridget Micgreen” and the second was for “Bridget E. Mcinween.” Whoa. What merciless butchering of the McQueen/Mulqueen name! As I quickly ordered paper copies of these documents from the WHS, I could hear that brick wall rumbling and crumbling.

Based on the information in these documents, Bridget Elizabeth was pregnant with my grandfather at the time of her September 1894 marriage to Charles H. Chase. Grandpa was born on 7 January 1895. Now I had confirmation of my grandfather’s parents, whom he never really knew. I’m still waiting for the marriage and death certificates from Madison, and I hope they shed further light on this couple. There are still big questions needing answers. Why did Earl take his mother’s maiden name, Mulqueen, rather than his father’s name, Chase? Again, this is not typical, so there must be a significant story behind it. What happened to Charles H. Chase? I had often been told he died while my grandfather was young. But I had also been told his surname was Mulqueen. I am in the process of tracking down his story.

While I was on a research roll, I turned to Elizabeth Mulqueen’s parents. I easily located them on the 1860 U.S. Census for the Town of Holland in Brown County. Daniel and Mary Mulqueen, parents to James, 9; Thomas, 5; Margaret, 3; and Michael, 1 month old. On the 1870 U.S. Census, new children appeared, including Margaret, 7; Daniel, 5; Bridget, 4; and Mary, 1. That makes two Margarets with different ages, so either the 1870 Census is in error, or the first Margaret died and a new daughter bore the same name. The Census put Earl’s mother’s birth year at around 1866.

I next used my Family Tree Maker software (powered by Ancestry.com databases) to look for more information on this family. I found little Mary Mulqueen’s Wisconsin birth record, which listed the mother’s maiden name as Corcoran. So now I knew Daniel Mulqueen married Mary Corcoran, likely prior to 1851, when the family lived in Ohio. But I could find no birth or death records on file for any of the couple’s other children.

By digging more through news microfilm, I discovered that Daniel Mulqueen spent his final years at the Brown County Asylum, having been judged “insane.” Unfortunately, I have no information on his case, which could have simply been dementia. People with infirmities that could not be handled at home often ended up in county asylums, sometimes called “poor farms” or “insane asylums.”

Dan first entered the asylum on June 7, 1888. He was in and out of the institution over the next few years. He died at the Brown County Asylum on March 30, 1893. The only obituary, in the Daily State Gazette of Green Bay, read thusly: “Daniel McQueen, an insane man, died at the county asylum yesterday afternoon. He was 74 years of age. The funeral will be held tomorrow in the town of West Holland.” How sensitive. This man emigrated to America from Ireland, raised a large family on a successful farm in Wisconsin, yet the local paper only remembers him for an illness in his final years.

My Grandpa Earl and his sister moved to the Mulqueen farm near Askeaton after their mother died in March 1897. Their grandmother, Mary, lived on the farm until her death in 1913. The men of the farm included Daniel Mulqueen Jr. and his older brother James. I believe Dan and James are the bachelor uncles about which I’d been told.

Determined to start a life of his own, Earl left the Mulqueen farm and moved south to Racine County around 1916. He spent time as a farm hand in Kansasville, where his good friend Howard Gilson lived. Earl later moved to Racine and worked for J.I. Case before starting a long career for Wisconsin Electric. He met and married my grandmother, the former Margaret Madonna Dailey, at Racine on Nov. 23, 1920. They moved to Cudahy, Wisconsin, in the mid- to late 1920s.

The little hamlet of Askeaton, Wisconsin, is named for a village in County Limerick, Ireland. Farmers from County Limerick emigrated to America starting in 1844 and eventually made their way to Brown County, Wisconsin. Askeaton, Ireland, has a fascinating history, with ruins of a medieval castle that dates to about the year 1200 and a Franciscan abbey founded in 1389. It was once a large walled town, but in 1846 was described in an Irish gazetteer as “a poor lumpish village.” The population at the time the group of farmers left for Wisconsin was about 4,400.

In the span of just a few days, I’ve unearthed more information on Earl Mulqueen’s ancestry than I found in more than 10 years of searching. Now that the brick wall has come down, I look forward to fruitful research in the coming days and months.