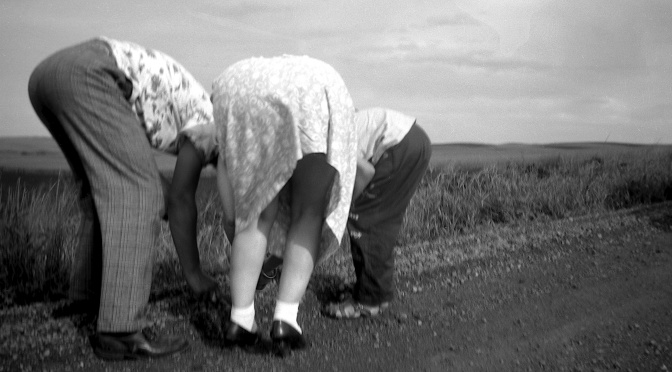 It wasn’t such a curious hobby, collecting rocks, but more in how it was done. Ruby Viola (Treutel) Hanneman (1904-1977), simply could not resist picking rocks up off the ground wherever she went. And judging by the facial expressions of those around her, it became somewhat of a family joke.

Rock collecting was certainly a Hanneman tradition. Uncle Wilbert G. Hanneman (1899-1987) had a rock shop up in Wausau, from which many a Hanneman child procured varieties of colorful, polished rocks. I have a bag of them to this day. Ruby liked to get her collectibles the old fashioned way, by finding them. She’d bend down to grab the most interesting or unusual ones, and husband Carl F. Hanneman (1901-1982) was often nearby to capture the moment on film.

The best examples of this hobby (or habit) came on a family trip from Mauston, Wisconsin, to Williston, South Dakota in 1947. After getting caught all bent over on several photographic occasions, Ruby and the kids shot back. They put their heads together and gave old Carl Hanneman a two-cheek salute.