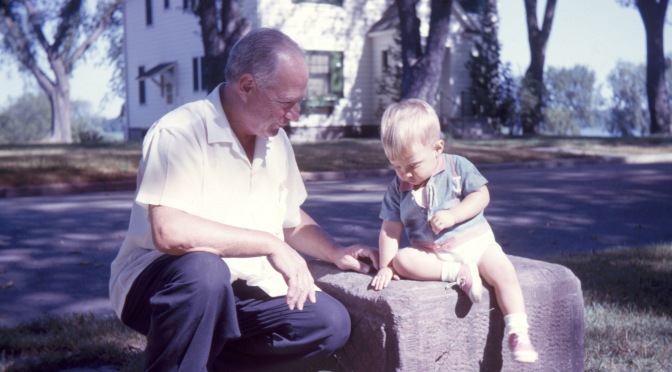 Back in the days when horses were the main mode of transportation, many homes across America had carriage stones near the street to assist those stepping down from horse-drawn carriages.

A fine example of the carriage stone stands in front of the old Hanneman home on Morris Street in Mauston, Wis. The carriage stone no doubt served its time as a platform to access horse-drawn transportation. But for many more decades the large granite stone was a family gathering place for photos and a launch pad for dozens of children at play.

More than 70 years of photographs held by The Hanneman Archive provide ample testimony to the importance of the old carriage stone. The earliest photographic records we have is from 1937, although the stone was likely original equipment when the home was built in the early 1890s. Brewmaster Charles Miller built the home at 22 Morris Street with the finest materials, so it’s no surprise he would have a carriage stone out front.

For the 15 grandchildren of Carl and Ruby Hanneman, the carriage stone was much more than a cool novelty. Just standing on the stone seemed to give a great vantage to the yard, even though  the stone was just 18 inches high. It was always a race to see who would get first dibs on the stone.

For many of those old photos, family members sat or stood at the carriage stone in the shade of towering elm trees. The old trees are long gone now, but the stone remains, looking just the same as it did in the 1930s.

In several visits in years prior to his death in 2007, David D. Hanneman stopped at the house and asked the current owners if he could take the carriage stone. Initially they agreed, but later changed their minds. Seems the lady of the house had become attached to the old stone, as evidenced by the flowers lovingly planted around its edge. That’s understandable. Just another generation of folks who’ve come to care for that old carriage stone.

— This post has been updated with a photo gallery 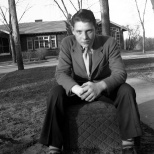 David D. Hanneman poses on the carriage stone, circa 1946. 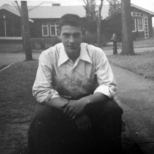 David D. Hanneman poses on the carriage stone, circa 1947.

Lavonne Hanneman (front) and brother David (at right) sit on the carriage stone, circa 1942.

Marghi and Amy Hanneman stand on the carriage stone next to Grandpa Carl F. Hanneman in the 1970s.

The carriage stone is still visible in this 2007 photo.

The old carriage stone in 2013: covered in lichens and sunken just a bit from its heyday.