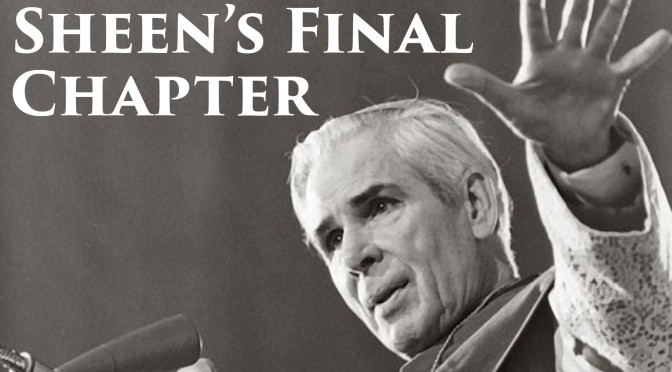 From my just-published article in Catholic World Report:

Driven and sustained by his daily holy hour before the Blessed Sacrament, Archbishop Fulton J. Sheen lived an intense life of holiness, zeal to save souls and Christian love that helped make him the most influential Catholic in 20th century America, biographer Thomas C. Reeves says.

Reeves has released a previously unpublished conclusion to his 2002 Sheen biography, America’s Bishop: The Life and Times of Fulton J. Sheen. The conclusion chapter, titled “Living Intensely,” covers Sheen’s spirituality, his inspiration and how others viewed his life. While Reeves does not directly promote Sheen as a candidate to be raised to the altars, his book’s concluding chapter is a very tidy summation of Sheen’s merits for sainthood. Reeves is making the chapter available for free on the internet, and has donated it for inclusion in his papers at Marquette University.

“To an extraordinary degree, his mind was on God,” Reeves wrote of Sheen (1895-1979), the prolific author and Catholic evangelist best remembered for his 1950s television series, “Life is Worth Living.” “This supernatural approach to life activated and sustained his enormous energy. He said late in life, ‘the secret of my power is that I have never in fifty-five years missed spending an hour in the presence of our Lord in the Blessed Sacrament. That’s where the power comes from. That’s where sermons are born. That’s where every good thought is conceived.’ ”

Read the rest at the Catholic World Report web site.