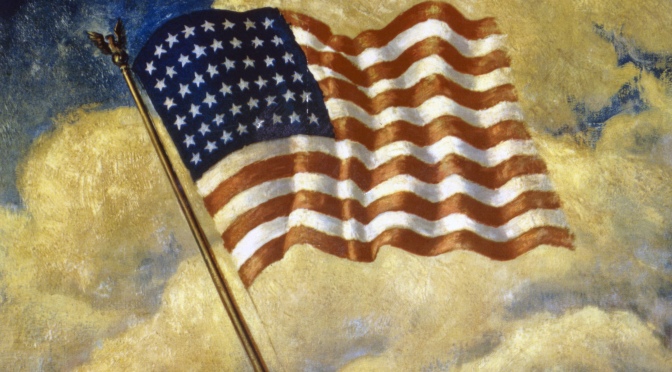 It was just after daybreak on a Saturday when Father M.W. Gibson climbed to the spire of St. Patrick’s Catholic Church in Racine, Wisconsin. In a bold sign that faith and patriotism go hand in hand, he hoisted an American flag onto the spire, where it waved in the breeze for all to see. It was April 20, 1861 and the War of the Rebellion had just broken out. Father Gibson wanted to remind area Catholics what was at stake in defending the country’s sovereignty.

Later that same day, a crowd of 1,000 people gathered in Racine’s Market Square (now called Monument Square) and marched north across the Root River to St. Patrick’s. They sought to thank Father Gibson for his patriotic statement. Gibson implored the crowd to recall that the country for which their forefathers lived and died was calling to them. The time had come, he said, to answer that call. 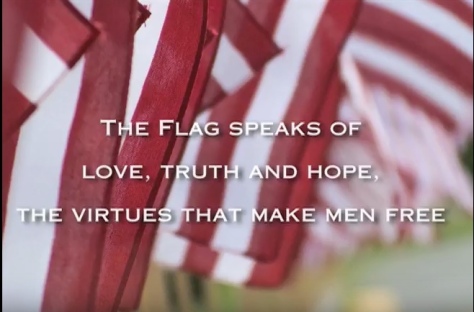 This true story is from a ceremony I wrote for the Knights of Columbus in 2009 to honor the American flag and those who have died defending it.

“Let us commit to always honor our flag and protect it. Protect it from enemies without – and within – who seek to diminish its honor, lower its stature or desecrate it in protest.”

Those words were used in a ceremony providing a reverent retirement by fire for American flags that were no longer fit for service. On this Independence Day, they also offer a look at how previous generations viewed the United States and the symbol of its freedom. We quoted the stirring words of Father Raymond Mahoney, who as chaplain of the Racine Knights of Columbus penned a poem in May 1920 honoring the American flag:

“Heaven itself is unfurling the flag of the land we love, and I hear Columbia telling her children the story of how the flag came to be”

In the blood that they gave for the cause of right
A thousand true martyrs lay
And the angel that tends on hero souls
Came down at the close of day
To gather them in, and to carry them
Before the Lord of all
Then as over their forms she kindly stooped
Her snow white wings let fall

But as she passed on through the evening skies
The souls to her bosom clung
She tore from the skies a bit of the blue
And over her shoulders flung
That azure so deep, that was star begemmed
In thought perhaps it might
When she came to the throne of the Master, hide
The stain of blood from sight

So she lay at his feet those hero souls
And bent low with wings outspread
And he saw that those wings were star sprinkled blue, and white, and bloody red
He asked what it meant, why the wings were stained
In fear the angel said
“Oh, the red is the blood that theses heroes spilled
The blue is Your own fair sky
And with it I have sought to hide the stain
Lest it displease Your eye”

“The stain on your wings,” he answered her
“Is truly a blessed one
And is always the mark of a crimson tide
That for liberty has run

“For it tells of service and sacrifice
Of a life and a death or right
And the blue speaks of hope, the white as truth
Sends forth a welcome light
To gleam for mankind as for travelers beams
The building star of night

“Spread out your wings o’er the universe
That all who behold may see
The flag that speaks of love, truth and hope
The virtues that make men free”

You can watch the entire flag retirement ceremony below.