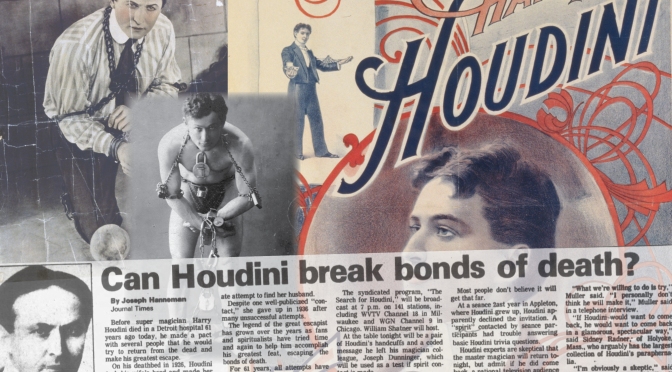 Before super magician Harry Houdini died in a Detroit hospital 61 years ago today, he made a pact with several people that he would try to return from the dead and make his greatest escape.

On his deathbed in 1926, Houdini took his wife’s hand and made her repeat their pact – that the first one to die would try to come back.

They agreed on a message, the name “Rosabelle,” followed by code words spelling out “believe.”

For 10 years, Bess Houdini held seances on Halloween in a desperate  attempt to find her husband.

Detpite one well-publicized “contact,” she gave up in 1936 after many unsuccessful attempts.

The legend of the great escapist has grown over the years as fans and spiritualists have tried time and again to help him accomplish his greatest feat, escaping the bonds of death.

For 61 years, all attempts have failed.

Seeking Coded Message
In the true spirit of Halloween, a group of Houdini experts will gather tonight at a seance table in Los Angeles and again try to contact Houdini, in front of a national television audience.

The syndicated program, “The Search for Houdini,” will be broadcast at 7 p.m. on 141 stations, including WVTV Channel 18 in Milwaukee and WGN Channel 9 in Chicago. William Shatner will host.

At the table tonight will be a pair of Houdini’s handcuffs and a coded message he left his magician colleague, Joseph Dunninger, which will be used as a test if spirit contact is made.

That message includes 10 words circled on a letter written to Houdini from Sir Arthur Conan Doyle of “Sherlock Holmes” fame. Ten more code words are on a piece of paper in the pocket of a Houdini expert.

Most people don’t believe it will get that far.

At a seance last year in Appleton, where Houdini grew up, Houdini ap­parently declined the invitation. A “spirit” contacted by seance participants had trouble answering basic Houdini trivia questions.

Houdini experts are skeptical that the master magician will return tonight, but admit if he did come back, a national television audience would be a perfect forum.

“He thought if anybody could make it, he would,” said Henry Muller, owner of the Houdini Magical Hall of Fame in Niagara Falls, Canada.

“What we’re willing to do is try,” Muller said in a telephone interview. “I personally don’t think he will make it.”

“I’m obviously a skeptic,” said Radner, who before World War II was a protege of Houdini’s brother-magician, Theo Weiss, whose stage name was Hardeen.

“I would like to be around if Houdini or anybody else comes back and can prove it,” he said, also in a telephone interview.

Both Muller and Radner will be at the table at tonight’s seance.

“Like Houdini, I’m ready to be shown,” said Dr. Morris Young, a New York physician who watched Houdini’s performances in the 1920s and has written a book about Houdini.

“A lot of people would like to believe,” Young said. But, “I think we’re going to reach a black hole sooner than that.”

In 1926, Houdini fell ill after a performance in Montreal when a McGill University student punched him in the stomach to test the strength of his muscles.

By the time his tour reached Detroit in late October, peritonitis set in and Houdini’s fate was sealed.

Birthplace Controversy
Born Erich Weiss in 1874, Houdini’s place of birth remains a controversy. Houdini, who took his name from French magician Robert Houdin, claimed his birthplace was Appleton, but some biographers believe he was born in Budapest, Hungary.

Not at anytime since humbug king P.T. Barnum hornswoggled thousands in the mid-1800s had there been such a showman as Houdini.

The larger-than-life master of escape thrilled audiences with derring-do and sleight of hand and body. No pair of handcuffs, no straitjacket, packing crate, coffin or chain could hold Houdini.

He accepted challenges from jailers, prisons and packing crate companies. He won every time.

Audiences were amazed as he escaped from the Chinese Water Torture Cell. He spent 90 minutes underwater in a soldered coffin. And he walked through a solid brick wall.

Houdini also spent time disproving those who claimed to make contact with the dead.

He made no friends in the burgeoning spiritualist movement by exposing fraudulent mediums – proving those who claimed to speak for the dead were fakes.

Tonight’s seance, despite the obvious commercial draw, carries on that work.

“In essence, we’re doing exactly what Houdini would do if he were alive,” Radner said.

“In my opinion, by not having him come back, it ought to put doubts in the minds of intelligent people that it can’t be done,” Radner said. “If Houdini can’t do it, why could their Auntie Mae do it?”

And how would Houdini view the continuing attention to his life and death?

“He was the (best) showman that ever lived,” Muller said. “That’s exactly what he would love was the publicity he’s getting – to the point of being immortalized.”

Radner said Houdini’s continued popularity is due to an air of uncertainty and magic.

“Everything about Houdini leaves questions and doubts and wonderment,” Radner said. “This is what makes the mystery so great.” ♦

– This article originally appeared on Page 1 of the October 31, 1987 edition of the Racine Journal Times. View the original newspaper pages.