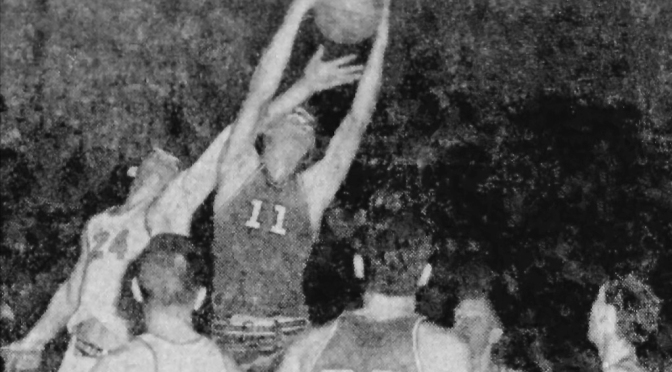 A reader flipping through the pages of the La Crosse Tribune on March 4, 1950 might just have missed a great sports action photo buried on Page 10, the back cover. It’s a great photo because it shows real action — and it doesn’t hurt that one of the key players is David D. Hanneman of Mauston High School.

March 1950 was high school basketball tournament time. Mauston High School was one of the host venues for sub-regional tournament play for Wisconsin’s public schools. The action photo was actually from March 3, 1950, the second day of the sub-regionals; a game in which Mauston knocked off Hillsboro 45-37. In the photo, Hillsboro center Allan Wheeler grabs a rebound over the outstretched arm of Hanneman, wearing No. 24 for the Mauston Bluegold. Although he did not score in the contest, Hanneman, the Mauston center, held the prolific scorer Wheeler to just 9 points. Just a day prior, Wheeler scored 22 points in Hillsboro’s loss to La Crosse Central.

Mauston ended its season after going 1-1 at the sub-regional tournament. In the first game on March 2, Tomah stormed back from an 11-point deficit to clip Mauston 40-36. Tomah won the sub-regional title the next day by whipping La Crosse Central 67-47.

Dad played three seasons of basketball for Mauston High School between 1948 and 1951. He was also a three-year letterman in football, helping Mauston to a conference championship in the fall of 1947.

A few other basketball photos from Dad’s Mauston years are below:

The 1948-49 Mauston junior varsity team, coached by Bob Erickson. Dave Hanneman is first on the bench at left.