The 15-year fire department veteran was killed Tuesday evening July 10 when a gas leak set off a massive explosion in the 100 block of West Main Street. The blast leveled several buildings and triggered a five-alarm fire that required mutual assistance from area fire departments. Sections of downtown Sun Prairie were still off limits four days later.

Fire engines, squad cars and rescue vehicles from around southern Wisconsin formed a long memorial procession from McFarland to Sun Prairie. The hearse carrying Barr’s body processed through fire station No. 1 before arriving at the Tuschen-Newcomer Funeral Home. Ladder trucks from the Waunakee and Columbus fire departments formed an arch under which the procession traveled. 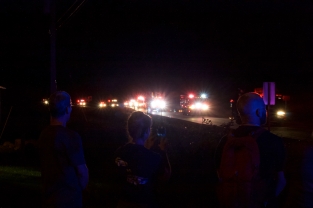 The huge explosion and fire that leveled numerous buildings in Sun Prairie on July 10 and 11 reminded me of another massive fire in the same area more than 40 years ago. On March 3, 1975, a fast-moving fire destroyed the Schweiger Walgreen Drug Store and Hillenbrand’s shoe store in the 200 block of East Main Street.

The fire alarm was sounded at 1:51 p.m. that day, bringing 33 firemen from the Sun Prairie Volunteer Fire Department to the scene. They were shortly joined by another 25 firefighters and trucks from Stoughton, DeForest and Marshall. The fire was discovered in the basement of the Schweiger Walgreen’s store, 214 E. Main St., and quickly spread to the adjacent Hillenbrand’s and apartments above both buildings. It took more than five hours to fully contain the blaze. The last crews left the scene at around 11 p.m.

Margaret McGonigle, 75, became trapped on the roof of the drug store building when the stairs down from her apartment were blocked by fire. She was rescued by the snorkel truck from the Sun Prairie Fire Department, according to the March 6, 1975 issue of the Sun Prairie Star-Countryman. Mrs. McGonigle was the widow of pharmacist John M. McGonigle, whose family owned and operated McGonigle’s Drug Store for more than 50 years before Robert Schweiger purchased it in 1970. She was also postmaster of Sun Prairie for 38 years before retiring in 1966. John McGonigle died in September 1965.

I distinctly recall going downtown with my father to view the aftermath of the fire. I recall the outriggers on the snorkel truck, and large amounts of road salt around the tires of the fire engines. The pharmacy held special memories for us, since my grandfather, Carl F. Hanneman, was a reserve pharmacist who occasionally worked for McGonigle’s. The Hillenbrand clothing and shoe stores were run by John Hein, a good friend of my parents, and the shoe store was managed by Roger Reichert, also a family friend. Reichert lived above the store and lost all of his belongings in the fire.

The state fire marshal investigated the blaze, but was unable to determine a cause. Damage to the structures and contents was estimated by Fire Chief Milton Tester at $200,000. Within a week, Schweiger’s opened in temporary quarters on Bristol Street. The buildings were a total loss and had to be demolished.

“Many fine things have been said about our volunteer firemen before. But last week’s fire had to be one of their finest efforts,” read the “Shavings from the Editor’s Pencil” column in the Star-Countryman. “I spent nearly three hours in that biting cold watching those magnificent, heroic firemen work. Not once did I see anyone so much as flinch at going into a burning building or otherwise approaching a dangerous situation.”

Both the 2018 fire that claimed the life of Capt. Cory Barr and the 1975 fire had one thing in common: a pharmacy. The Barr House tavern at the corner of Bristol and Main streets, owned by Capt. Barr and his wife, once housed the Crosse and Crosse Drug Store, according to the Sun Prairie Public Museum. The building dates to the 1890s.

The Schweiger fire was one of three major blazes in Sun Prairie in 1975. On Aug. 10 that year, fire swept through the Moldrem Furniture store at 13 N. Bird St. in the Bird Street Centre. The fire did about $185,000 damage to the 34-year-old business. The store was a total loss. A backdraft blew two firefighters out the front doors of the store. Retiring assistant fire chief Arnie Kleven described the fire as his most frightening in an August 2017 interview with The Star. Kleven said the doors probably saved his life that day. Wiring in the air conditioning system was cited as the cause of the fire.

(This post has been updated with details on the Moldrem and Gawne fires.)

A snorkel truck was used in the dramatic rescue of Margaret McGonigle, owner of the drug store building, who was trapped on the roof. (Sun Prairie Star-Countryman photo) 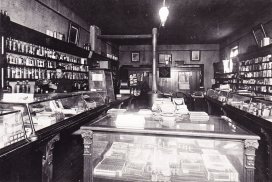 Shelby Beers behind the counter of the Crosse and Cross Drugstore, circa 1920s. (Sun Prairie Public Museum photo)