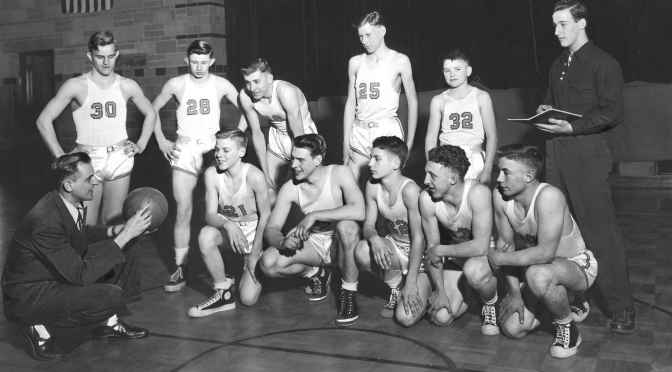 This photo from 1948 or 1949 has a classic sports-pose look to it. The varsity basketball squad from Mauston High School looking eagerly at Coach Bob Erickson, who cradles the ball like it’s made of gold. It’s so much more interesting than the stereotypical team photo with athletes lined up in rows.

My father, David D. Hanneman,  was a multi-sport, multi-year letter winner at Mauston High School from 1947-1951. It was very common to have multi-sport athletes at small-town high schools. A core of the young men in this photo played basketball together in grade school before moving on to high school junior varsity and varsity play. These same fellows came together with classmates for Mauston High School reunions for more than 55 years. That’s teamwork!

In the 1950-51 basketball season, Mauston advanced to the sub-regional level of the Wisconsin Interscholastic Athletic Association (WIAA) tournament on March 1 in Tomah. In the first game, Mauston rallied with a 23-point third quarter to defeat Richland Center, 55-53. Tom Rowe led Mauston scorers with 15 points.

In  the sub-regional championship game March 2, Mauston ran into a buzzsaw called La Crosse Logan High School. The Bluegold lost big, 72-36. After trailing 8-1 early in the game, Mauston pulled to within five at the end of the firsts period. In the second period, Mauston got as close as three points, 20-17, but then the game got out of hand.

Logan led 29-19 at halftime, according to the game recap in the La Crosse Tribune. At the start of the final quarter, Mauston trailed 50-24. Five Mauston players fouled out of the game. The leading Mauston scorer was Roger Quick with 8 points, while Tom Rowe, Bob Jagoe, Bob Randall and Dave Hanneman each had 5 points. La Crosse Logan made it to the regional tournament finals before losing to Onalaska, 58-56.

One of the best games of that 1950-51 season came on December 19, a 61-42 decision over conference rival Westby. “Big Dave Hanneman had himself a field night for MHS as he hoisted in eight buckets and added four free throws for scoring honors,” read the game recap in The Mauston Star. “Jagoe collected 15 points and Randall had 9 — he scored the first 9 points of the game for MHS.”

Coach Erickson was still fairly new during my Dad’s time at Mauston High School, but he went on to become a legend as a coach and teacher. A 12-time letter winner at Platteville State Teachers College (now UW-Platteville), Erickson was named to the UW-Platteville athletic hall of fame in 1980. He came to Mauston in 1947 after serving in World War II, starting a 13-year tenure at Mauston High School. Erickson coached boxing, basketball, football and baseball. He also served as Mauston’s athletic director. He died in July 2003 at age 82.

5 thoughts on “Eye on the Past: 1940s Mauston High School Basketball”