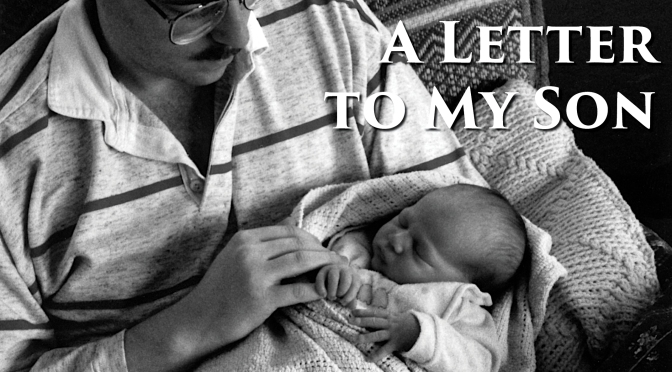 I wish I could get you a big birthday gift this year, like prepaid college tuition or a new car. But I can’t. I think I have something much more valuable to share, though. I wrote the letter below almost 23 years ago, when you were barely two weeks old.

Much has changed in our lives and in the world since then. You grew up and overcame big challenges on your way to high school, and then college. You’ve gone out into the work work and supported yourself as you pay for your own education. I know that has been hard, but it is a great credit to you, and I’m very proud of you.

When I wrote the letter, we had no idea who you would become. You were at times a cranky baby, with lots of colic. But you were mostly happy. It was a sheer delight watching you grow up. As I see you ready to celebrate your 23rd birthday, I can say that I could not be a more proud Dad of my only son. Just like the letter says, you’ve grown up to be a good man. I love you.

You probably don’t like us calling you Stevie anymore, but right now, it fits you perfectly. It’s 10:30 p.m. on a Sunday. I’m watching a rerun of M*A*S*H on television as your Mom naps on the couch. You are asleep in your crib down the hall. I can hear you breathing over the nursery monitor.

There are a lot of things I want to say to you. The first is that your Mom and I love you very  much. You’re only 2 weeks old, but you’ve added so much to our lives. And now we sit and imagine what kind of a person you will grow up to be. We know you’ll be a good boy, and eventually, a good man.

First, some history. You were born at 8:41 p.m. on Jan. 20. You weighed 7 pounds 13 ounces. I’ll never forget your little hand clutched around my finger as you lay on the incubator table. You were so alert as you waited to be put in a blanket.

The day you were born, George Bush was President of the United States. Tommy Thompson (a good friend of your great Grandpa Carl) was governor of Wisconsin. Your Dad works as a reporter for the Racine Journal Times, covering state government and politics. Your Mom works for Communications Concepts in Racine, doing graphic arts on a computer. The top TV shows are Cheers, Murphy Brown and L.A. Law.

You are a beautiful baby. You have dark eyes, red hair and soft, rounded cheeks. You’re only 2 weeks old, but already you can lift your head in the crib. I wonder what you are thinking when you gaze up at us while you’re feeding or playing. We nicknamed you “Popeye” because when you want your bottle, you look up with only 1 eye open and open your mouth.

You were conceived at the end of the 1991 Persian Gulf War. Your Mom was in the Army Reserves and was called off to war in Dec. 1990. She was stationed in Augsburg, Germany, as a food inspector. When she came home from war in April 1991, we had you. You were part of what was called “Operation Desert Stork,” named after the war, “Operation Desert Storm.”

As I write this your Mom and I are looking forward to seeing you crawl, take your first steps, and all the things that come after. But for now, there’s one thing we’re sure of — how happy we are you’re here. 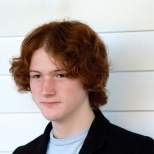 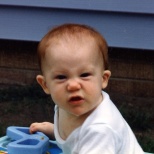 Stevie with one of his patented expressions. 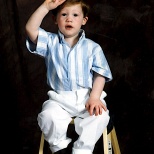 We used to stuff pillows in our sweatpants and hip check each other around.

One of my favorite photos, taken at Wisconsin Dells. 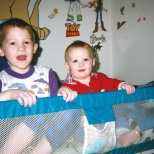 Stevie with sisters Ruby and Samantha. 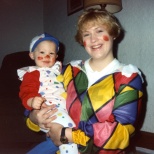