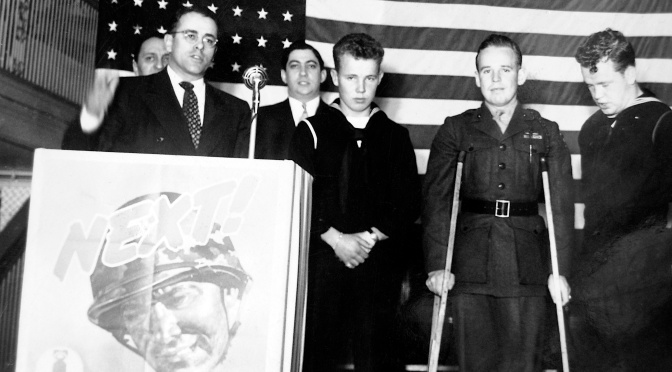 It was just the kind of wartime story that made an emotional impact on Milwaukee and the state of Wisconsin. Three Irish brothers serving in World War II appeared together to promote the sale of war bonds at a series of rallies in November 1944. Two were home on leave from the front and one was about to embark on his first overseas tour of duty.

There they stood on stage, the baby-faced Thomas “Tinker” Mulqueen still in naval training, the serious Marine Cpl. Earl J. Mulqueen Jr., on crutches due to the loss of his left leg above the knee, and the curly-haired redhead, Patrick J. Mulqueen, home from more than 18 months at sea with the U.S. Navy.

The impact the boys had was most evident at a bond rally at Schuster’s Department Store on Milwaukee’s North 3rd Street. The event got off to a slow start. Ben Barkin, head of the local war finance committee (later a legendary Milwaukee PR man and founder of the Great Circus Parade) was worried. That all changed when the Mulqueen boys took to the stage. “They are so cute,” one woman said. “They look like little boys playing soldier.”

Now the crowd was interested. Barkin introduced the lads. The 17-year-old Tommy was first to step forward and said simply, “You buy the bonds and the Mulqueens will win the war.” Considering he had yet to set foot in a combat zone, such as statement could have been viewed as a “wisecrack by a fresh kid,” The Journal wrote. But it wasn’t. “When Tommy said it, you knew he was telling the solemn truth,” the paper wrote. (Tinker went on to serve as a sailor on the fleet oiler USS Mattaponi.)

Earl talked about the war. At 21, he had seen more fierce combat than most would ever see. He fought at Guadalcanal and Tarawa with the 2nd Marine Division. Those were two of the bloodiest, deadliest battles of the entire Pacific war. Earl was a mortar crewman, so he was right at the front.

Earl was helping prepare an invasion fleet for the 1944 assault on the Mariana Islands when his landing ship-tank (LST) blew up at Pearl Harbor. The massive chain explosion caused the loss of many ships and resulted in hundreds of casualties. Because of the preparations underway for the invasion of Saipan, the Pearl Harbor disaster was a classified secret until the 1960s. So Earl was only able to say that he “almost made it to Saipan.” (Details of Earl’s war service and loss of his leg in the West Loch disaster will be the focus of a future Archive story.)

Patrick spoke of his experience as a fireman aboard the light cruiser USS Concord (CL-10). He enlisted on August 7, 1942 and by March 1943 was among the compliment of 700 aboard the Concord. The ship escorted reinforcement convoys in the southern Pacific, and prowled the dangerous, icy waters of the north Pacific. The Concord was involved in numerous bombardments of the Kurile Islands. During 1943, the Concord was on a surveying mission of the South Pacific with retired Rear Admiral Richard E. Byrd, the famous explorer. The ship visited Tahiti, Bora Bora and the Easter Islands. A huge explosion onboard on October 7, 1943 took the lives of 22 crewmen. Caused by ignition of gasoline fumes at the rear of the ship, the explosion threw some men overboard, while others were killed from concussion, burns, fractured skulls and broken necks. On October 8, those men were buried at sea. After participating in bond rallies in Milwaukee, Patrick was assigned duty on the USS Crockett (APA148), a Haskell class amphibious attack transport. The USS Crockett had just been commissioned on November 28, 1944.

The crowd at Schuster’s quickly figured out that these “boys” had seen and experienced the horror of war. “It was simple and short,” The Journal wrote. “No frills. No hero stuff, no dramatics—nothing but a couple of kids, one on crutches, asking people to buy and sell bonds.” The stories of the Mulqueen boys had the desired effect. Barkin exclaimed, “You know, the bond drive is going to come out all right.” He was right, for the Schuster’s bond drive raised more than $500,000.

Schuster’s was just one of many venues at which the Mulqueen boys spoke. At some rallies, they were joined by their mother, Margaret “Madge” Mulqueen, who was deeply involved with the war effort through the Wisconsin chapter of the Marine Corps League. She had four blue stars displayed in the window of the Mulqueen home at 3854 E. Cudahy Avenue in Cudahy — one for each of the three boys and one for her daughter Margaret, a Navy nurse based in San Diego.

The bond drives were a crucial part of the home-front effort in World War II. Across the nation, eight war-bond drives between 1942 and 1945 raised more than $190 billion. Investors purchased $25 bonds for $18.25. Bonds were redeemable after 10 years. Companies sponsored in-house bond rallies, and employees pledged purchases through payroll deduction. Children were encouraged to buy 25-cent war stamps to save up for their own war bond. Special sections of local newspapers were dedicated to promoting bond sales. On the radio, popular programs such as Fibber McGee and Molly dedicated entire episodes to war bonds and other home-front efforts.

Earl Mulqueen and Army T/Sgt. Louis C. Koth appeared at such a corporate event at Oshkosh B’Gosh Inc. on November 30, 1944. They were introduced by company president Earl W. Wyman. Koth was a radio operator aboard a U.S. Army Air Force B-17 bomber that was shot down during a mission over Schweinfurt, Germany. Koth was on his third mission in a B-17 Stratofortress when he was forced to parachute into enemy territory. Taken prisoner and repatriated 11 months later, Koth lost his right arm. Koth began participating in the bond tours shortly after being released from a hospital in Madison in the fall of 1944.

Koth and Earl Mulqueen toured Oshkosh Motor Truck Inc. and Universal Motor Co. Later they were interviewed live on radio station WOSH by local bond chairman Richard J. White. “Both of these boys are giving freely of their time to help the sixth war loan campaign,” White said. “They have made sacrifices beyond any that we are being asked to make, and although they will not see action again, they are both anxious to do whatever they possibly can to see that ammunition does not have to be rationed at the front.”

The bond rallies helped explain the costs of supplying the troops. Toothbrushes cost 8 cents each. A hand grenade was $1.56. An anti-tank shell cost nearly $3. A Garand rifle was $55. A 1,000-pound bomb cost $250, while a 75-mm Howitzer cost $11,350. A PT boat cost the military $145,000, while a 1,630-ton destroyer had a price tag of $10 million. A fully outfitted battleship cost $97 million. Bond drives supplied the U.S. government with needed cash, while giving ordinary citizens a concrete way to participate in the war effort.

Largely due to Barkin’s tireless efforts, Milwaukee’s World War II war-bond drives became a model for the nation. Described by The Milwaukee Journal as an “ace ward bond salesman,” Barkin was honored as Milwaukee’s man of the year in 1945 by the Milwaukee Junior Chamber of Commerce. For his $1 annual salary, Barkin popped up just about everywhere in Milwaukee: schools, churches, civic clubs and businesses. The 28-year-old was unable to enlist due to a disability, so he threw his energy into raising money for the war effort. Doctors told him to slow down, but the pitchman didn’t listen. He gave more than 1,000 speeches each year as head of the community division of the war finance committee.

“Let’s show Milwaukee what their money is buying,” Barkin said in 1943. He organized a “Wings for Victory” parade of tanks, jeeps, artillery and other hardware to do just that. Funds from the rally after the parade were used to buy military transport planes for Mitchell Field. Barkin convinced Milwaukee to rename Wisconsin Avenue “War Bonds Drive” for the duration of World War II, a practice later adopted in dozens of other cities. He understood the importance of having soldiers, sailors, airmen and Marines tell their stories. The results were often heart-rending. He told the story of a Milwaukee woman who stood in line for two hours to buy a war bond for her boy, serving in North Africa. Her husband had just died two days prior. “Doggone it,” Barkin told Walter Monfried of The Milwaukee Journal, “that kinds of gets you, doesn’t it?”

So Barkin knew when the Mulqueen boys stepped on stage, the people would dig deeply into their pockets to support the war. “No matter what the mood of the meeting before the kids talk,” The Journal wrote, “when they finish, that meeting is sure of going over the top.

“Everyone who has heard the Mulqueen brothers agrees,” the paper wrote, “that the kids are among the best in the world.”

[This post has been updated with more details on the Oshkosh bond drive on November 30, 1944]
©2014 The Hanneman Archive

Professional writer, history sleuth and lover of family. "I don't live in the past, but it's a great place to visit."