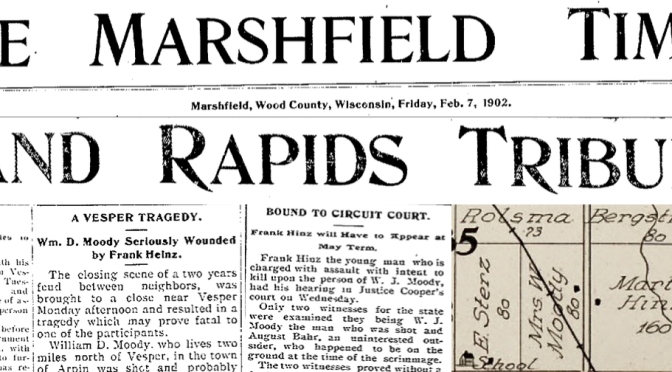 It might not have been the Hatfields and McCoys, but the simmering feud between the John Hinz and William Moody families of Wood County, Wis., almost turned fatal in February 1902.

The Moody and Hinz farms sat just across the road from one another in the Town of Arpin, about a mile north of Vesper, Wis.  On Monday, Feb. 3, trouble started when the two family dogs got into a fight. Members of both families then got into a roadside melee that ended with William Moody being shot in the chest by 22-year-old Frank Hinz.

Newspaper accounts of the donnybrook varied wildly. The Marshfield Times said Moody was “probably fatally wounded” by the “young criminal” Hinz, whom the paper said has a “sneaky and guilty look about him.” The Grand Rapids Tribune called Hinz a “poor shot,” noting that he missed once and actually shot his own father in the wrist with another of his bullets. Lena (Treutel) Moody, aunt of Ruby Treutel of Vesper, swung an axe handle at Frank Hinz during the fracas.

The Tribune said neither man was seriously wounded, although three surgeons responded to the scene. Hinz was arrested by Wood County Sheriff James McLaughlin and charged with assault with attempt to kill Moody.

According to newspaper accounts, the dispute between the families involved pets, children and parents. A few months before the shooting, Martha Hinz reportedly threw pepper in the face of one of the Moody children. The dogs would fight whenever they came into contact.

On the day of the shooting, Lena Moody and John Hinz got into a shouting match in the road after the most recent dog fight. When William Moody came upon the scene, he got into fisticuffs with the elder Hinz. Young Frank Hinz retrieved a revolver from the farmhouse and fired several shots at close range.

At his trial in May 1902, the prosecution called numerous witnesses, including William Moody, Lena Moody, daughters Esther and Anna, and Lisetta (Treutel) Moody, another aunt of Ruby Treutel. Each witness for the state was paid $2.28 for their appearance in court. Hinz was found guilty of a reduced charge of simple assault and fined $50 plus court costs by Justice of the Peace T.J. Cooper. With costs the total levied against Hinz was about $200, in lieu of a six-month jail term.