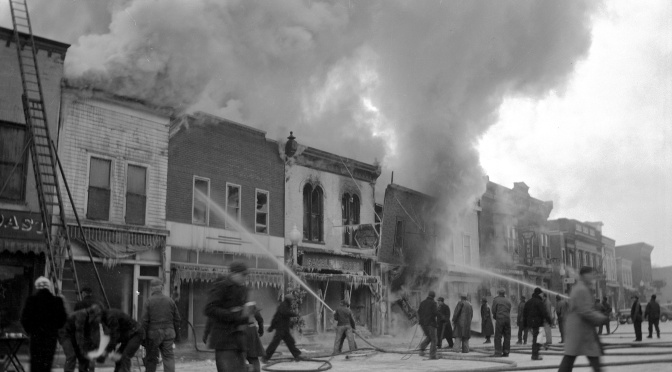 It was the fire of the century in the tiny city of Mauston, Wisconsin. Life may have started normally on Friday, Jan. 5, 1945, but before 9 a.m. a massive fire broke out that threatened to wipe out the city’s downtown. The man called on to document the blaze for local law enforcement was Carl F. Hanneman, the druggist at the Mauston Drug Store. It may have been the most prominent collection of photos he shot, but was just one among many accidents, fires and crime scenes he photographed over the years.

Carl would have been readying himself for the trip to the pharmacy downtown when the fire broke out that January morning. About  8:30 a.m. the fire started in the rear of the Gamble Stores building along the north side of State Street. Within 30 minutes it had spread to four downtown buildings and threatened the entire business district. 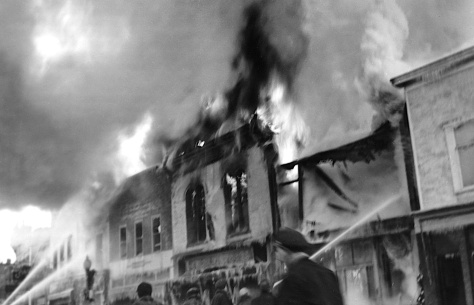 As firefighters from Mauston tried in vain to control the blaze in subzero temperatures, reinforcements from fire departments in Lyndon, New Lisbon and Wisconsin Dells raced to help. Carl stood just behind the line of rescue  workers and took photos.

It took five hours to control the huge blaze, which destroyed Gamble’s, Mauston Press Club dry cleaners, Samisch Bakery, the Fred Denzien barber shop and the All-Star restaurant. At one point during the blaze, the brick facade of the All-Star fell onto the street. Nearby businesses, including Vorlo Drug and Coast to Coast, were badly burned. Damage exceeded $80,000 – equivalent to more than $1 million in 2014 dollars. Mauston Fire Chief John Smith said calm winds kept the fire from sweeping through the entire downtown.

Carl’s efforts that day earned him a page 1 photo in the Wisconsin State Journal, and two additional photos on page 11. He served as a Mauston correspondent for The State Journal for many years, garnering numerous front-page stories and photographs.

Carl documented many local emergencies in Mauston and surrounding areas. He captured the moment when a semi-trailer plowed into the front of the Tourist Hotel, knocking down the sign and collapsing the awning. Many of these photographs have a custom “CF Hanneman” imprint on the back, so it’s obvious Carl shot a fair number of news  photos. Some photos from the 1945 fire have even shown up on Ebay.