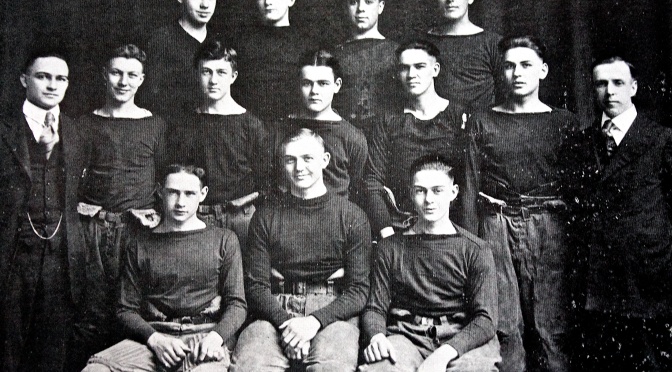 Carl was one of 10 young men on the first string football team that opened season on September 18,

1920 at Wisconsin Rapids. It was an up-and-down season as the Rapids team racked up a 4-3 record. Highlights included a 39-0 victory over New Lisbon and a 28-0 win at Stevens Point. The team took a 56-0 drubbing at the hands of Antigo and suffered a 26-6 loss to Merrill.

Carl was one of the smaller members of the team, but that did not reflect his playing ability. “What he lacked in size he surely made up for in playing,” the yearbook said. “Carl was right there when it came to breaking up end runs. Often he would run in and stop the opponents’ play before they had got well started.”

One thing Carl did not have that his teammates did was a nickname. Other young men on the team had nicknames such as “Cyclone,” “Butch,” “Tubby,” “Kid” and “Murphy.” Carl did not have a football nickname, but he did have the nickname “Oswald” next to his high school senior portrait. We’re not sure what to make of that one.